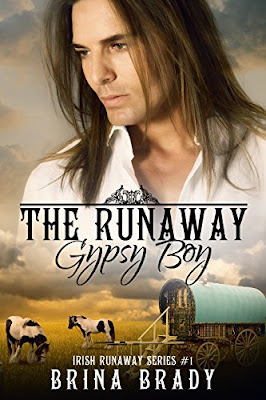 
Twenty-year-old Daniel Serban loses his dancing job and threats of being outed to his family force him to flee Limerick, Ireland. Daniel fears his father and the other gypsy men will force him to marry his betrothed, or bring bodily harm to him for being gay.
As chance would have it, he ends up in Cleary’s Pub, a gay leather bar in Galway where he meets the grouchy, ginger-bear Ronan O’Riley. Daniel had no idea how much meeting the Dom would transform his life.
Ronan O’Riley has been unable to move on since the death of his sub a year ago, that is until a troubled gypsy boy steps into Cleary’s. Ronan’s lonely existence is about to change.
Can Ronan convince Daniel to trust him or will Daniel’s fears of his past ruin any chance of a relationship? Unexpected heated attraction in the barn ignites their relationship to move forward. Though the two men have many of the same dreams, Daniel’s secrets and Ronan’s need to gain Daniel’s trust are just a few of the many challenges they must overcome if they are to be together.

The Runaway Gypsy is a unique, fun romance by Brina Brady.

How often do we get to read about a romance with a gypsy? This is definitely a first for me. Daniel's a gypsy boy, who's run away from his gypsy family, fearing their reaction when they discover that he's gay. I find all of the gypsy scenes, and people's reaction to a gypsy to be well written.


What follows is an entertaining romance when Daniel tries to find a job and meets Ronan.

Ronan's a complete control freak, and Daniel just left a insanely controlled environment, making for some interesting situations. Living under Ronan's control takes some getting used to. Eventually trust becomes the key to their relationship. Of course, the author does a wonderful job of explaining the differences between the gypsy's need to control and Ronan's need to control.

Their romance isn't easy, as they have to survive betrayal, violence, pain and grief. Some of the scenes are heart-wrenching to read about. Luckily, we also see healing and trust.

The Runaway Gypsy Boy definitely makes for a good, emotional read. I am impressed with Brina Brady's vision for this story.