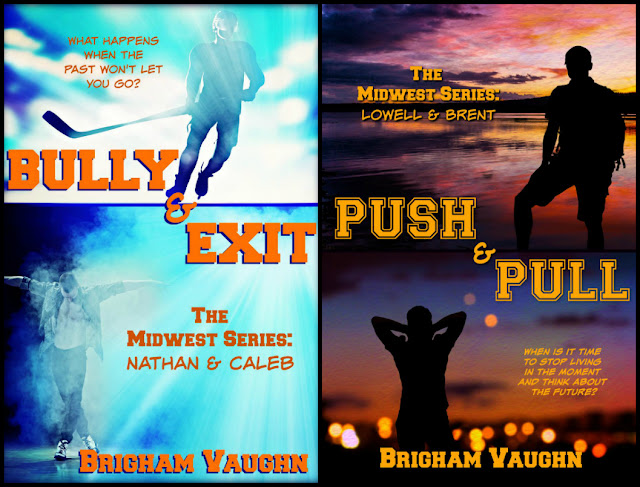 
What happens when the past won’t let you go?


Theater student Caleb Stockwell is ready to leave college behind. Too bad his past isn’t ready to let him go.


With less than a month to go until graduation, Caleb runs into Nathan Rhodes at a house party. Nathan is a star hockey player for Western Michigan University and finally ready to step out of the closet. He’s also the guy who broke Caleb’s heart in high school.


Nathan’s determined to make amends for what he did four years ago, but Caleb isn’t willing to risk getting his heart stomped on again. With only a few weeks left before they go their separate ways, it’ll take all of Nathan’s creativity and help from some interfering friends to convince Caleb to give him a second chance.


I read Bully & Exit several years ago and I remember loving it then. Upon re-reading this romance by Brigham Vaughn, I am once again in love with Nate and Caleb.

College is ending, and Nathan wants to get Caleb back. It's been four years since they've been together, or even friends, as Nathan wanted to stay closeted.
But Nathan can't hide anymore, as it's slowly killing him.

Through the use of flashbacks, we learn about their hidden affair in high school. I love the way this was done, as we go back and forth between the present and the past, using the flashbacks to slowly reveal their past. Through these slow reveals, it not only keeps the reader intrigued and invested, but also helps us to realize why Caleb is so hurt and bitter.

Bully & Exit is a fantastic coming of age story that involves bravery and the power of forgiveness. Brigham Vaughn does a wonderful job with showing how difficult it can be to make amends, as well as giving us the beauty of a closeted athlete wanting to be their true self.

Nathan’s voice was soft when he spoke, gentle as it’d always been. “Caleb Stockwell. I’ve been looking for you.”


Caleb cleared his throat and ignored him, tipping the bottle up for another long drink. He licked the spiciness from his lips as he debated making another run for it. There was a shrub blocking his way in one direction and a hockey player in the other. Even if he hadn’t been drinking, the odds weren’t in his favor. “Nathan Rhodes,” he managed.


“Damn, I can’t believe it’s you!” Nathan leaned in, and Caleb pulled back, uncomfortable with him being so close.


Caleb laughed bitterly. “It’s me. Now that you’ve satisfied your curiosity, you can run along.” He motioned with his hand, encouraging Nathan to leave.


“It’s really good to see you,” Nathan said, ignoring him. He took a seat on the pile of discarded construction materials, his knees brushing Caleb’s as he lowered himself down. Caleb pulled away as if scorched.


“Yeah? Too bad I can’t say the same,” he muttered, his head swimming as the alcohol began to hit him. He eyed Nathan’s long, long legs and the way he was pinned in by them, remembering the way they’d felt tangled with his as they came, panting shallowly against each other’s skin. It brought it all back: the scent of Nathan’s cologne, the taste of his skin, the way Caleb’s heart raced in his chest when Nathan held him close. It brought back the memories, the ones he’d worked so hard to run from. The good and the bad. The sharp, intense happiness of falling for Nathan. The aching, crushing hurt that paralyzed Caleb for months after Nathan was no longer in his life. Everything he’d buried four years ago and vowed never to touch again.


He caught the first glimpse of doubt on Nathan’s face. “Are you okay, Caleb?”


“Oh, I’m motherfucking peachy,” he snarked and took another long drink. “I’ve made it through four fucking years trying to ignore the fact we’re on the same campus, and with barely a month left in my senior year, I thought maybe I’d managed to pull it off. But, no, Lowell had to drag me to this goddamn party, and, of course, you showed up too. Just my luck.”


He raised the bottle again, but Nathan wrapped a hand around the neck and tugged. He was stronger than Caleb, so Caleb let go, afraid he’d end up getting pulled onto Nathan’s lap if he didn’t. Nathan took a drink and passed the bottle back, licking the taste of rum off his lips before he spoke. “You’re so angry at me.”


“Ya think?” Caleb snarled. “Didn’t it ever occur to you I would be? What the hell makes you think you can waltz in here and pretend like all the shit that went down between us didn’t happen?” He tried to stand, but Nathan’s dark denim-clad knees were on either side of his, pinning him in place. The bottle was pried from his suddenly limp fingers and set aside.


Caleb’s lips parted in surprise as cool fingers framed his face, and for the first time in four long years, Nathan’s lips were pressed to his again. Involuntarily, Caleb’s eyes closed, feeling a rush of heat wash over him, taking him right back to the first time. Before Nathan broke his heart.

When is it time to stop living in the moment and think about the future?


Brent Cameron has been dreaming about a road trip around Lake Michigan for years. When his best friend, Nathan, ditches him to spend the summer with his boyfriend, Caleb, Brent is pissed. Stuck between a rock and a hard place, he reluctantly agrees to take Caleb’s best friend, Lowell Prescott, instead.


Brent is a former hockey player and recently out of the closet. Lowell is an in-your-face gay guy who rebels against the limits people put on him. Tempers fly and sparks flare as they hit the road, which leads to a hot night they both regret in the morning. Despite the rocky start, Brent and Lowell slowly begin to realize they have a lot in common. As the miles disappear behind them so does their animosity. Casual hook-ups aren’t Brent’s thing, and Lowell doesn’t do relationships, so they agree to focus on their friendship.


By the time they make it to the shores of Lake Superior, their feelings have deepened past simple friendship, but neither of them have the guts to admit it. When the past intrudes, will it derail the trip and the possibility of a relationship?


Push & Pull is the second book in Brigham Vaughn's Midwest Series. As I loved book one, Bully & Exit, I was super excited to get to read this one, and it held up to my expectations.

In this book, we are treated to a fun and exciting romance between Brent and Lowell. As complete opposites, they get off to a rough start together. But, as luck would have it, they end up taking a road trip together.

Brent's spent his life as a closeted hockey player. Out now, he's still weary of spending time with the out and proud Lowell, who's graceful, likes makeup and is super rich. Personally, I love the over the top, dramatic, force of nature that is Lowell.

I found myself enjoying every second of their trip together, liking the slow way in which they start talking about their pasts, and trying to put it behind them.

Their trip is full of flirting, teasing, and some major sexual tension. Unfortunately, they also face awkwardness, confusion, grief, and avoidance.

I absolutely love Push & Pull. Brigham Vaughn does a fantastic job of taking such difference men and having them slowly fall in love. It is fun, entertaining, riveting and had me unable to put it down. It's a definite recommendation for me.


“Do you really mean to tell me you don't want to get to know me in all sorts of ways? I don't believe that. I’ve seen the way you look at me." Lowell reached out and dragged a finger across the black fabric of Brent’s T-shirt before circling his nipple. Brent flinched again, backing away, even as the skin tightened and his nipple hardened to a pointy little nub.


Flustered and irritated by the reaction, Brent pushed Lowell’s hand away and crossed his arms. "You're nuts if you think I'm taking you with me on this road trip."


The smile and words only served to make Brent angrier. He looked back at Nathan, feeling used. “Have you all just been cooking up this plan while I’ve been gone?”


“We’ve been talking about it for a couple of weeks, yeah,” Nathan said softly. “Trying to figure out the best solution.”


“What the FUCK? You couldn’t be bothered to mention this when we talked?”


Nathan’s uneasy look deepened. “I thought it might be better if we could discuss it in person.”


“You could have fucking called me and said, ‘Hey, can we meet in person? I need to talk about the trip with you.’ Don’t I at least get a say in what happens with the next two months of my life? Jesus, you guys are unbelievable.”


Nathan opened his mouth but Lowell spoke first. “Look, Brent, I get that you’re pissed, but you don’t have a lot of options at the moment. Frankly, you’re between a rock and a hard place right now, and I’m your only solution. Either you cancel your trip and lose money, which sucks. Or you change your plans and go by yourself, which also sucks. Or you take me. I also suck, but in much more enjoyable ways.” Lowell winked.


Brent gaped at him for a moment. Lowell stepped forward and put his finger under Brent's chin. "Unless you’re offering to do something useful with that gorgeous mouth, I suggest you close it."


Brent snapped his mouth shut fast enough to rattle his teeth. "What the fuck are you talking about?"


"I know what sucking cock is," Brent yelled, confused and annoyed by the pretty twink with the big eyes who always made him feel off-kilter and out of control.


“And make all the jokes you want, but this isn’t fucking funny. My whole summer is ruined.” Brent turned to Nathan. “And you. You’re a complete traitor. You’re right though, I have no choice but to put up with him.” He jerked a thumb to indicate Lowell. “So fuck you, Nathan. If you think I am going to forgive you for saddling me with that cock-hungry twink for two months you have another thing coming!”


Nathan made a sound of protest. Brent scowled and held out his hand to Lowell, ignoring Nathan completely. “If I’m stuck with you, then we’re taking your car. And hand over the damn keys. I’m driving.”


Brigham Vaughn is on the adventure of a lifetime as a full-time author. She devours books at an alarming rate and hasn’t let her short arms and long torso stop her from doing yoga. She makes a killer key lime pie, hates green peppers, and loves wine tasting tours. A collector of vintage Nancy Drew books and green glassware, she enjoys poking around in antique shops and refinishing thrift store furniture. An avid photographer, she dreams of traveling the world and she can’t wait to discover everything else life has to offer her.

Email ThisBlogThis!Share to TwitterShare to FacebookShare to Pinterest
Labels: B Vaughn