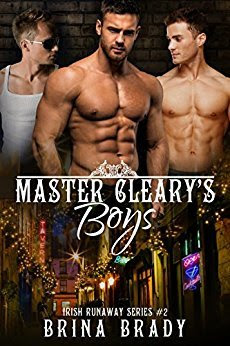 Desperate to escape the clutches of an increasingly sadistic and abusive Dom, Kevin and Jack seize their opportunity to escape and runaway to Galway. They shave their heads and do their best to avoid being detected while searching for a new Dom who is prepared to take them on as package deal. Their running leads them to Cleary's Pub—a bar full of leather-clad Doms and subs, owned and run by Master Cleary...
Master Cameron Cleary was in need of a new sub—it had been far too long since he'd had a boy in his life. Each night as he ran his pub filled with leather-clad Doms, accompanied by their Subs, he became more aware of how solitary his life had become. That is, until two young cousins turned up one night looking for work, a place to stay, and more intriguingly a Dom who would take them both. Something about their recently shaved heads and skittish demeanor stirred his interest and protective nature. But did he want two subs, and was he prepared to deal with whatever trouble these boys were hiding?

Master Cleary's Boys is the second book in Brina Brady's Irish Runaway series, but it can definitely be read as a standalone.

Kevin and Jack are two subs who've escaped from their abusive Dom. When they meet Master Cleary, the demand to be kept together. Thus, we get a unique and interesting twist of a Dom having two equally important subs. To make things better, Master Cleary is unsure of having two subs and has to decide what to do.

Their story isn't easy or quick. They have to deal with insecurities, doubts and jealousy, in addition to a lot of manipulation. The abuse is difficult to read.

Master Cleary's Boys is well developed and completely riveting. Brina Brady does a fantastic job with these two young men, taking them from an abusive situation, and ultimately placing them in a loving relationship.