REVIEW TOUR - Only You by Kay Doherty

Case Holden hates his life. Made rich at
a young age, he slipped into a lifestyle of partying with multiple boyfriends
who only wanted to be with him for what he could give them. After confiding to
his aunt that he’s miserable, she extends an invitation for a visit. Case plans
to spend the time in small town Clover City to reprioritize and plant his feet
on the road to happiness. He does not expect the Clover City sheriff to step
into his world and wreak havoc on his emotions.

Two years ago, after the death of his
partner, Rawley Kane moved to Clover City, trading the painful memories and big
city madness for a less stressful existence. Even as sheriff, his life is
uncomplicated and quiet. That is until Case Holden rolls into town and reminds
Rawley just how lonely he is, and of everything he’s been missing.

Case is everything Rawley shouldn’t
want. The man has six boyfriends and a life back in Denver, not to mention he’s
quite a bit younger than Rawley. No matter what he tells himself, he can’t get
enough of the young man. And Case has made it clear Rawley is the only one he
wants. Now if they could just get past Rawley’s guilt and Case’s insistent
boyfriends, they just might stand a chance.

Kay Doherty's Only You is a fun, angst free romance.

It's a romance with a strong insta-love element, so stay clear of it if you hate insta-love. As it's a quick story, we get very light character development. And it contains a great age gap, which  I always love.

It's a romance between two men who seem to have nothing in common. Rawley has been closeted his whole life, including when he was with his ex partner, who he's still mourning. And Case is someone who is juggling 6 boyfriends, as he hasn't met anyone special yet. I actually really like this pairing a lot. I enjoy the changes they bring about in one another. To find that right person who inspires you to completely change your life around and make a commitment is beautiful, so I am always a sucker for this. But, I can definitely see that for some people, everything happens too fast and without enough background. Knowing it was a short story, I was fine with it.

Overall, Only You is a good way to pass the time. It's quick, entertaining and an easy read.

Rawley had spent the past four days in

his truck with his trusty radar gun, nailing speeders at various points across
town. The past two days, he’d been sitting at the railroad crossing at the edge
of town; a hot spot for teenagers speeding down the main road and over the
tracks without looking. It had been a year since the last death occurred on
these tracks and he intended to keep the streak going. He sighed loudly as he
tore off the latest ticket and gave the seventeen-year-old boy behind the wheel
his usual speech about safety. He’d given out half a dozen the past couple of
days, but if it saved a life by making the kids think twice, it was worth the
mind-numbing boredom.

Rawley climbed back into his truck, shut
off the emergency lights, and drove back to his parking spot partially hidden
by the wall of the feed store near the tracks. It had been the usual quiet on
the crime front the past several days, which was typically a welcome occurrence
for Rawley, but ever since Case Holden’s arrival, Rawley’s thoughts had been
plagued by gray-blue eyes, dark hair, and a perfectly toned body. He spent his
nights tossing and turning, imagining Case in any number of different
scenarios, every one of them sexual. The whole situation was frustrating him.
He took the edge off every night with his hand, but it didn’t satisfy the deep
need he had for another man’s body—Case’s body in particular.

Rawley shifted on the bench seat and
adjusted himself. He seriously needed to get a grip. The moment Case climbed
into his truck, drenched from the rain, Rawley had suspected he was gay, but
after running into each other several times around town the past few days,
Rawley was now certain. The knowledge only worsened his predicament because he
knew if he wanted Case badly enough, he could have him. The man didn’t even try
to hide his sexuality or his attraction to Rawley. When they’d seen each other
the day before at the general store, he’d been wearing a dark-blue T-shirt that
had “Out and Proud” stamped across the chest in rainbow lettering.

They’d found themselves face-to-face in
front of the dairy display — Rawley in his tan police uniform and Case looking
like a model in his skintight T-shirt and painted-on jeans. Conversation had
been polite but stilted. Rawley knew it was his fault because he was too busy
noticing every little dip and curve of Case’s body to speak coherently.

Knowing Case was gay and that he
wouldn’t make a play for the younger man had Rawley short-tempered and sniping
at everyone. That was why he was sitting alone on the outskirts of town, doing
traffic duty; no one wanted to be around him, including himself. Rawley stared
into the distance, wondering what the hell he’d done in this life or a past one
to earn him this level of torture, when a vehicle he would’ve been hard-pressed
to miss caught his attention. The bright-gold Mustang roared past him,
registering ten miles per hour over the speed limit.

“Oh, you’ve got to be shitting me,”
Rawley muttered. He turned on the emergency lights and siren as he pulled onto
the road.

There was only one person in Clover City
who drove a Mustang. He caught up to Case quickly, and they pulled to the side
of the road, Rawley coming to a stop a few car lengths behind Case. Rawley
exited the truck and walked up to the driver’s side of the car to find Case had
rolled down his window and held out his license and insurance card. Rawley took
them, willing his body not to react to the beautiful smile Case offered him.
Rawley couldn’t help but notice that Case wore a black shirt that made his hair
seem even darker and those gray-blue eyes brighter.

“Get pulled over a lot, do you?” Rawley
asked, averting his gaze to Case’s papers.

Everything about Case drew attention, or
at least Rawley’s. He put his mind to the task at hand, making sure Case’s
license and insurance were up-to-date before handing them back through the
window.

“I didn’t get pulled over driving my
aunt’s Jeep.”

“Did you speed in the Jeep?”

Case shrugged. “It was a manual with no
oomph.”

“Slow down,” Rawley said as he turned on
his heel to return to his truck. 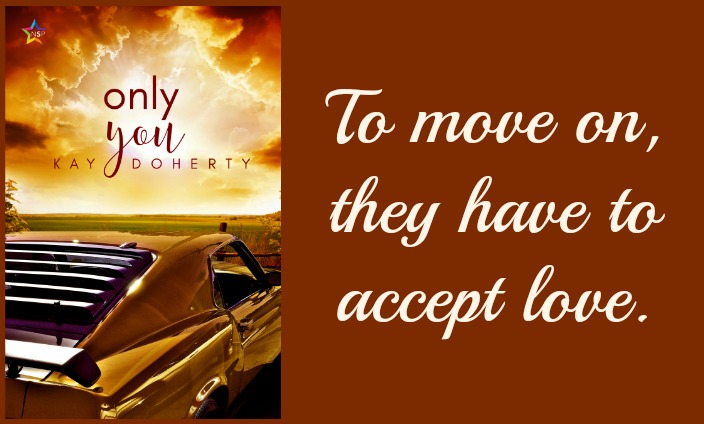 
Kay lives in Colorado with her husband and their animal children. Family is important to her, so there are weekly visits to her parents and frequent text messages with her brothers. She has a severe addiction to coffee and Mexican food. She loves to read and write and can easily become consumed by it for hours, much to the dismay of the husband and dogs. On occasion, she can be convinced to venture out into world of the living.