In my attempt to cover some of the attending authors for this year's GRL,I am reviewing
Andrew Grey's new release
Heart Untouched! 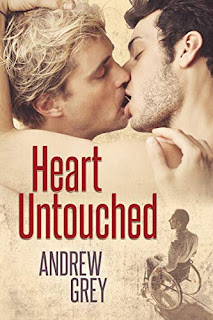 A Hearts Entwined Novel
An accident crushed Duncan’s Olympic dreams and landed him in a chair, but he knows it’s time to get his life back on track—and he has a plan in mind. Working with his friend Todd, an Olympic skeleton racer, on a promotional campaign will not only help Duncan regain some direction, but it’ll give Todd the financial boost he desperately needs. The sport Todd loves is draining his resources—so much so that he’s thinking of giving up racing just to make ends meet.
As the two men work together, their friendship blossoms into much more, and suddenly the future is looking brighter than it has in a long time. But just when love, happiness, and success seem within their grasp, the USOC steps in with plans to stop their campaign. That’ll mean an end not just to Duncan’s business, but to Todd’s dreams… and Duncan isn’t about to let that happen to the man who means everything to him.

Wow! Andrew Grey excels at writing characters with physical limitations, whether it be that a character is blind, deaf, or in a wheelchair. And, with Heart Untouched, he has written another remarkable book.

Duncan's a former Olympic prospect, who is in a wheelchair after being injured. He believes he'll never find love, as he wouldn't want to burden anyone with someone who can't function properly in the bedroom. He is just getting through his days, completely lacking any zest for life.

As he starts working with his friend Todd, their friendship is renewed, and Todd is upset at seeing how different Duncan is now, as he's sullen and negative. Both men are forever changed as they both help each other tremendously. They push each other to be the best they can be, and to find what makes them happy. And they also find a not-so-little thing called love.

As a couple, Duncan and Todd are so darn good together. They compliment each other well, and truly want the best for each other.


As always, Andrew Grey's writing is fantastic, with a great pace and good development. And it's always fun to see some of the guys from Andrew's previous books make appearances!

Don't miss out on Heart Untouched, as well as the rest of the Hearts Entwined series. Andrew Grey is just one of those writers who is sure to please.

Andrew grew up in western Michigan with a father who loved to tell stories and a mother who loved to read them. Since then he has lived throughout the country and traveled throughout the world. He has a master's degree from the University of Wisconsin-Milwaukee and works in information systems for a large corporation. Andrew's hobbies include collecting antiques, gardening, and leaving his dirty dishes anywhere but in the sink.