His Instant Family (Stories Of Us #2) by Rheland Richmond 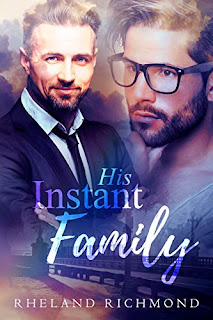 Shy and awkward Teo Wright, a brilliant young author, has met the man of his dreams in much older Michael, a widower, and father of three. The man has fired up his fantasies and refuses to let go. Discovering they are both single sets them on the road to forever.
“I want to wake up to this every morning.”
Dr. Michael Ashworth has been focused on his work for too many years and although now he is one of the best doctors in his field, it has been to the detriment of his family. But when Teo comes into his life, Michael knows the young man is his future. Teo has made him feel alive and whole again. However, Michael’s in-laws are not thrilled to find their ‘straight’ son-in-law, is in fact bisexual.
Dating a man is not the only issue threatening the life he and Teo are building together. Michael’s teenage son is also not a fan of his father having a boyfriend that is so much younger.
A rebellious teenager and bigoted relatives are hurdles Michael and Teo must overcome before they can find their forever, but nothing good ever comes easy… especially when there are kids to consider.


His Instant Family, the second book in Rheland Richmond's Stories of Us, is a wonderfully sweet romance.

Michael and Teo have an instant attraction when they meet, but they both think the other is taken. For Michael, Teo is the first person that he's been attracted to since his wife died.

The beauty of their relationship for Michael is that Teo helps bring the light back into Michael's life. Since his wife dies, Michael had been spending all his time working, lost in his pain and loneliness.  It's touching to see they ways in which Teo pulls him out of the darkness.

One of the things I absolutely love about this story is the way in which the age gap between Michael and Teo is handled.  They are about 15 years apart in age, and the men discuss the things that make their relationship work despite the age difference. Most novels tend to skip over the logistics, but this one perfectly addresses it.

Another special thing about this book is the thought of family. Upon reading the title, I assumed it means that Teo will be gaining an instant family when he falls for Michael and his kids. But, Michael also gets an instant family in Teo's parents, siblings and more. It is heart-warming to see them both find the family they are missing.

I definitely recommend His Instant Family, as Rheland Richmond manages to pen this feel good story while keeping me anxiously awaiting the next in the series.