In my attempt to cover some of the attending authors for this year's GRL,I am reviewing
Alexa Land's Kindred Spirits! 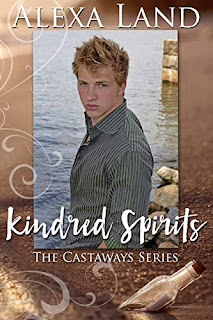 Elijah Everett knows he should feel good about the progress he’s made over the last four years, ever since he ran away from a terrible situation at age sixteen. With the support of his loving, adopted family, he recently graduated from college and has a good job and an exciting new life waiting for him on Catalina Island. But his past has left him with little confidence and a list of fears a mile long, and Elijah wonders if he’ll ever fully heal.
Cassidy Juric doesn’t talk about his past. He doesn’t talk about much at all, actually. And yet, Elijah thinks he recognizes a kindred spirit in the gorgeous young ranch hand. The two are undeniably drawn to each other, and a tentative relationship starts to develop. But when the devastating truth about Cassidy’s past is revealed, Elijah wonders if asking Cassidy to trust him might be asking the impossible.
Can two broken men learn to open their hearts and take a chance on love? Or will the ghosts of their past prevent them from building a future together?
Kindred Spirits bridges Alexa Land’s best-selling Firsts and Forever Series and its all-new spinoff, The Castaways Series. Long-time readers will recognize some familiar faces, along with a new setting and several new characters. This book can be read as a stand-alone.

It's no secret that I love and devour Alexa Land's books every time a new one is released. And, wow, her new series, The Castaway Series, is going to be amazing!!!

In Kindred Sprits, the first book in her new series, Alexa transports us to the island ranch life. And it's spectacular. Despite being a spin-off series, it has everything we love about The First and Forever Series, including several of the guys we already love!!

Elijah is moving to the ranch, leaving his "family" of Chance and Finn. He's still crushed about losing his friendship with Cole. And Cassidy, oh so quiet Cassidy. Elijah is determined to break down Cassidy's walls. Honestly, the way they get to know each other is perfect! They are two shy, socially awkward and broken men. Expecting them to just start talking wouldn't work. Thus, the way Alexa Land handles this is exquisite!

Their story contains so much, as both men need a lot of courage to open up and change, as fear has ruled their lives. Elijah's goodbye moment with Finn is tear-jerking. (Darn you, Alexa Land!) Elijah's dealings with Cole are heart-breaking. It was so tough to read this part. (Again, Alexa, why do you insist of making me cry?) We see grief, guilt, pain, trust issues, and more.

The beauty of this story lies in the unique stories of each man, as usual. I adore and appreciate Elijah's genius, awkwardness and anxiety. He's written so realistically, and I love him. And Cassidy, wow, just wow. I already liked his brokenness and his awkwardness. But learning that his background is just so darn tragic really brings him to life. His story is awful, his response pretty normal, and his ability to heal with Elijah's help is everything you could ever ask for in a book. These two young men not only compliment one another, they also make the other better.

Kindred Spirits is everything I could hope for in an Alexa Land romance. In other words, go and read it now!

Alexa Land is the author of the brand-new Castaways Series, a spin-off of her best-selling Firsts and Forever Series. The spin-off begins with Kindred Spirits.Her Firsts and Forever Series includes:1. Way Off Plan 2. All In 3. In Pieces4. Gathering Storm 5. Salvation 6. Skye Blue7. Against the Wall 8. Belonging 9. Coming Home 10. All I Believe10.5 Hitman's Holiday (novella)11. The Distance


13. Worlds Away
13.5 Armor (Novella)
14. All I Ever Wanted
15. Take a Chance on Me
15.5 Once Burned (Novella)
16. The Rest of Forever
Alexa is also the author of the paranormal three-volume set The Tinder Chronicles, and its prequel, Feral.
To learn more, please visit: http://alexalandwrites.blogspot.com/