RELEASE BLITZ & REVIEW - Trusted (Until You #3) by Karrie Roman

Zach Piper has escaped his father’s cult only to find himself in a world he doesn’t understand. Abused and neglected, he’s grown up an outcast among outcasts. He has no business trusting anybody after what he’s been through, but when Cameron Cronin takes him in and shows him a world he never knew, he willingly hands over his trust. In Cameron he finds honor and decency—someone who cares.

Cameron lives without love and he prefers it that way. He never wants to fall in love again. The last man he loved shattered Cameron’s heart as surely as his trust. When he takes in much-younger Zach, who recently emerged from his own hell, he hears the familiar whisper of long-dead feelings. But he doesn’t want to love. He cannot trust he won’t be broken again if he does.

As time passes and the two men get to know each other, Cameron’s feelings for Zach deepen whether he wants it or not. But just when Cameron decides to trust in Zach, and act on the love he knows is there, both of their pasts come storming back to threaten everything they’ve built. When their lives hang in the balance they must trust each other enough to get out alive.

Wow, with Trusted, Karrie Roman once again treats us to a masterpiece.


I love a good story where two men not only fall in love, but have the type of love that can heal each other. And Trusted delivers just that!

In Trusted, we follow Zach, who's escaped from his father's commune. Life on the outside is fascinating as he sees and experiences so many things for the first time. Karrie Roman manages to capture and address this perfectly.

Told all his life that he was useless, Zach's now trying to re-build his life and his feeling of self worth. He's a refreshing and amazing character. As this story is so darn thought-provoking, you can't help but to wonder how the heck Zach survived his hell without being bitter.

And as for love, well Zach can't help but to feel attracted to Cameron, who's protecting him and helping him integrate into society. What follows is a beautiful tug of war between Cameron's physical desires and his closed off heart that's a result of a lot of past abuse.

They have to deal with mental issues, some danger, and more. We see them face fears, real danger, and a crazy person who means to harm them.

Trusted is an amazing book. It's completely riveting as you are taken on  an emotional journey that you will feel in your soul. I love Trusted and highly recommend it. Karrie Roman has quickly become one of my favorite authors.

Momma said she was okay and Momma didn’t lie to him, but there was so much yelling and he was scared. How could she be okay with all that yelling? He wanted to scream, but Momma told him to stay real quiet. He wanted to go see what was happening, but Momma told him to stay in the stream and finish washing. It sounded like Momma needed help. But he was just a little boy and Father always told him he was no good at anything, so what could he do to help anyway?

But she was his momma and she was the only one who loved him.

That shouting was getting louder, but he couldn’t hear Momma yelling back now; she was crying and making a funny noise. He was going to go help; he didn’t care if Father said he was a useless little shit. She was his momma. He looked down so he’d put his hand on the right rock to hoist himself out of the water, but something was wrong. The clear water of the stream was all red—the brightest red he’d ever seen.

Zach wasn’t sure if the scream in his nightmare carried over into the real world—he hoped not. He sat quietly for a moment, listening. He couldn’t hear anyone coming toward his room. Sweat danced trails down his back and plastered his hair to his head. His body was working through the last of the tremors as his breathing slowly calmed back to normal.

This wasn’t the first time he’d had this nightmare, and it wouldn’t be the last. But it seemed worse this time, and Zach couldn’t quite work out why. Perhaps it was the turmoil of the last few days.

Three days ago, Zach had fled his father’s religious cult with two young girls, one a maybe fourteen-year-old who’d been about to be forced into marriage with his father. The three of them had almost literally crashed into two men, Ben and Ethan, who had been searching for Ethan’s infant nieces. The little girls had been kidnapped by their father and taken to the cult. It had all been such a mess, made even worse by his father’s plans for the mass suicide of the cult members.

But he was safe; the girls were safe; everyone was safe. Ben and Ethan and the FBI—they’d saved everybody.

Right now he was sleeping in the house of Ben’s brother, Cameron. Cameron had also helped in their eventual rescue. Just thinking about Cameron woke up the butterflies in his belly, causing them to flutter around like crazy.

When he’d first encountered Ben out there in the wild, he’d thought him beautiful—and then he’d seen him kissing Ethan. Raised as he had been, secluded from the world in his father’s cult, Zach had no idea men could be together in the same way the men had been with the women of the cult. He hadn’t known such a thing was possible. Suddenly, the way Zach had always watched the men of the cult with such fascination and yearning had made sense. He finally made sense.

But all of that was nothing compared to how his body had reacted when he had seen Cameron for the first time. Beautiful hadn’t seemed a good enough word to describe Cameron. Zach didn’t even know of a word that could define the perfection he saw in Cameron Cronin. All he could think was how he wanted to press his lips to Cameron’s just like he’d seen Ben do to Ethan.

For now, the remnants of the nightmare clung to him, refusing to leave him in peace, so he knew he’d never get back to sleep. In the past, there’d never been anyone to comfort him, no one for him to go to for a few whispered words or a gentle touch to ease him through the lingering terror, but tonight Cameron’s face flashed in his mind, so he pushed the covers back to go in search of him. Everyone had been kind to him since his escape, but there was something about Cameron, something he didn’t understand but knew it made him feel good—safe—anyway.

As soon as he left his room, he noticed lights toward the end of the long hallway and heard soft voices coming from the same direction. Zach walked quietly, unsure of his welcome.

Four men sat in the room at the end of the hall: Cameron, Ben, Ethan and the FBI agent who’d been in charge of the raid on his father’s cult, Alec Banner. They were talking, and none of them seemed to notice his arrival.

“Cameron,” he called softly. His voice was so quiet he wasn’t even sure if Cameron would hear him from across the room, but he must have because he jumped up from his seat, immediately striding forward.

Zach’s tummy churned in that good way as Cameron came toward him. Everything about him was so perfect. He was tall and broad, thick muscles cording his arms and legs. He was so handsome. His face looked hard, as if it had been chiseled from stone, all angles, but it was stunning to look at. He had a bit of stubble covering his jaw, and Zach yearned to scrub his fingers over it just to see if it scratched his skin like he thought it would. Cameron’s pale-blue eyes never wavered as he watched Zach with concern.

“Only a nightmare,” he replied, nodding his head.

“Do you want to sit with us for a while?” Cameron asked and Zach looked over his shoulder at the other men, shifting his gaze to each of them.

“No, that’s okay. I just…needed to know you were here.” His words sounded pathetic to his own ear, but he saw only concern in Cameron’s gaze.

Cameron reached out an arm as though he was going to touch him and then just as quickly pulled it back. “I’m right here, Zach. I’m not going anywhere…you’re not alone anymore.”

Zach nodded, suddenly embarrassed a dream had chased him out here to these men like a frightened child. He nodded and turned to walk back to his room.

When he got there, he pulled his blankets onto the floor, hoping the familiar hardness of the ground would help him sleep. Comfort wasn’t something he was used to.

Cameron had told him he wasn’t going anywhere. He’d also offered for Zach to stay here with him until he got himself sorted out. The rest of the cult members were staying together. They’d set up a campsite just outside of town until the FBI had interviewed them all, but Zach didn’t want to go with them. He’d always been invisible to most members of the cult—an outcast even among outcasts.

Zach had accepted Cameron’s offer because he’d need help learning how to live in this strange new world he’d been dumped in. He’d lived on the periphery growing up, knowing there was another world there but not really understanding it. Hushed and whispered conversations of the decadence and sinfulness of the world had often reached his ears. Awed stories about televisions and phones and other such evil inventions of mankind had often enthralled him. Regardless of the threads of knowledge he had, though, he really knew so little of this world he’d suddenly been thrust into since his escape. And with his father arrested and the cult disbanded, there was no going back behind the closed walls of their commune. He’d have to find his way in this world, and he’d have to find it alone—or perhaps not as alone as he’d thought, if Cameron was truthful with him. 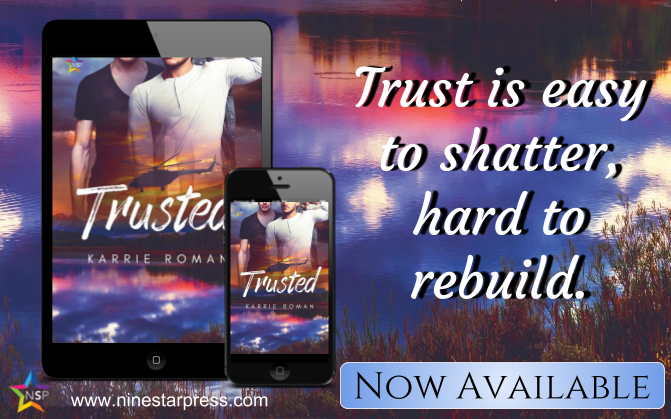 
Karrie lives in Australia’s sunshine state with her husband and two sons, though she hates the sun with a passion. She dreams of one day living in the wettest and coldest habitable place she can find. She has been writing stories in her head for years but has finally managed to pull the words out of her head and share them with others. She spends her days trying to type her stories on the computer without disturbing her beloved cat Lu curled up on the keyboard. She probably reads far too much.