In my attempt to cover some of the attending authors for this year's GRL,I am reviewing
Clutch
by Piper Scott
(with Virginia Kelly) ! 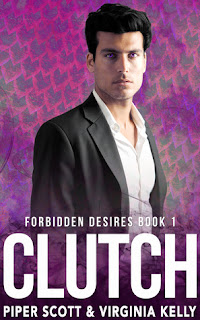 Bookish, snarky, and fiercely independent Nate Boudreaux leads a solitary life. Between teaching classes at the university and working toward his PhD, he doesn’t need a partner to occupy his time, and he certainly doesn’t need a man like Alistair Drake complicating his future.
Alistair Drake, black sheep of the tremendously wealthy Drake family, is more interested in adding another notch to his bedpost than another zero to his bank account. When a Grindr message brings him to Nate’s doorstep, then straight to his bed, he has no reason to believe that what they share will be more than a simple hookup, until, three months later, a tug on his soul informs him otherwise.
For the Drake family has a secret—one that will force Nate and Alistair together as much as it will demand that they be torn apart. One that Alistair and his brothers have carried all their lives… and one that Alistair and Nate’s future children will carry, too.
Bound to each other by the three precious impossibilities, Nate and Alistair have no choice—no matter the consequence, they will fight for their forbidden clutch.
Clutch is a 64,000 word steamy omegaverse mpreg-ish romance that will leave you in stitches. It contains a Grindr hook-up gone very wrong (or very right); giant magical lizards; a pig named Olive; a wank throne; and a HEA, right down to the white picket fence.

Clutch is not my usual read, but I dug in and gave it a try. As I don't normally read about dragons and lizards, I was hesitant to continue but it's definitely well written with some great characters. Nate and Allister are a lot of fun and I definitely enjoy the banter and bickering between them. What starts as a one night stand leads to so much more as the men start falling for each other while they're protecting their eggs.

Despite not being my normal choice of storylines, I am not surprised to find it enjoyable since Piper Scott and Lynn Van Dorn (Virginia Kelly's contemporary ego) are two authors I love.

Piper Scott is the brainchild of three romance authors who realized that while telling stories is almost guaranteed to be fun, telling them with someone else is even better. We hope you enjoy yourself in our stories - and remember that love always wins.

Virginia is the alter ego of Lynn Van Dorn, writer of MM contemporary romances. Virginia listens to the voices in her head that are far too fantastical and silly for Lynn. If it's mystical or otherworldly, Virginia is all for it.

In her spare time (ha!) she herds three cats, twelve rats, a pesky husband, and a son. Also a host of noisy fictional characters.