In my attempt to cover some of the attending authors for this year's GRL,I am reviewing
Adam's Trial by JM Wolf! 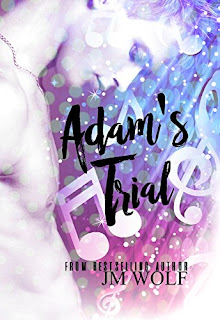 
“Sometimes, facing your personal trial can be a life or death situation. Do you have the courage to overcome the obstacles in your life before time runs out?” Determined to protect his older brother’s wedding, professional chef Jerrick Ramhart makes a deal with his cruel, homophobic parents. One that involves keeping his true desires locked away and deceiving his brother Gerard and his new family in Abingdon. In exchange, his parents agree to leave Gerard and his fiancé Jace alone. Jerrick doesn’t mind the sacrifice, just as long as Gerard gets the happily ever after he deserves. What he doesn’t expect is a fateful encounter with a wild, red-headed pop star. An encounter that threatens to expose Jerrick’s secret life. Recording artist Adam “Adam Love” Walker is known for living his life the way he wants. Doing and saying whatever he wants and not caring who likes it. Why shouldn’t he? After all, Adam isn’t sure when his life will suddenly come to an end. But after an unforgettable night with a sexy chef, Adam starts singing a different tune. Jerrick is everything Adam wants in a man, but what’s the point of being in a relationship if he can’t promise Jerrick forever? What happens when polar opposites with secrets cross paths in the most unexpected way? Adam begins to show Jerrick what it’s like to be free, and Jerrick is slowly showing Adam what life has to offer him. As stubborn as these two are, will they learn to accept each other before one of them checks out forever? TRIGGER WARNING: This book contains sexual adult content, mental and physical health issues, minor violence, and talks of death. *This is Book 2 in the series, but can be read as a standalone story - no cliffhangers*

I am at a loss for words to adequately describe Adam's Trial, the second book in the Abingdon series by JM Wolf. It is absolutely amazing and I feel honored to have been able to read it.

Adam and Jerrick's story starts during what is supposed to be a one night stand, after their first touch produced sparks. The following day, however, they are awkwardly reunited at the wedding of Jace and Gerard, as Jerrick has brought his girlfriend along.

It would be impossible for me to love Adam more than I do. I loved what we saw of him in Jace's Trial, and in his own story he gets even better. He is loud, fun, and makes me laugh often. He's a little but femme and flashy, with a whole lot of bark to his bite. I love his sass and his spark, and the banter it produces.

Or as Jerrick tells him "Adam, I've only known you for about thirty-five minutes, and I can already tell that you and normal should never be in the same sentence."

Jerrick is a chef, or a "sexy chef" as Adam calls him. He is so damn selfless, sacrificing his own happiness as he continues to play it straight. to help his brother Gerard.

I love that Jerrick had no idea who Adam was when they met, thus wanting to be with Adam, not Adam, the famous singer. Adam never expected to find someone he connected with, let alone understands him, but he definitely finds the perfect match for him in Jerrick.

This story is so damn well written, with alternating 1st person POVs, helping the reader to fully understand what they are both thinking. It is a terribly sad story, that is well handled and inspirational. I cannot rave about this story enough. I laughed, I smiled and I sighed like a damn baby.

Please do yourself a favor and read Adam's Trial. JM Wolf has created a wonderful series, based on a small town and it's people. And it is everything you could ask for in a romance!

JM Wolf never thought he would one day say that he's a published M/M romance author. Having a poet for a mother and a sister to once ran a blog, it was only a matter of time before JM discovered his writing genes. In the beginning, his sole purpose in life was to be a singer/songwriter. Writing lyrics was the first step putting his thoughts onto paper. Even while singing, JM always found time to dabble with writing little short stories but never thought too much about it.Once he reached adulthood, his music dreams left him, but not the feel of writing down what was in his mind. However, that didn't mean music no longer played a part in JM's life. His debut book The Black Feather was inspired by one of his favorite songs. Whether lyrics or love stories, you will always find JM's heart and soul in every word on paper.JM Wolf lives in Chesapeake, VA with his husband and in-laws. When he's not writing, you could always find reading a good book, spending time with the love of his life, or jamming out to music. He didn't pick the world of literature; the literary world picked him.
https://www.authorjmwolf.com