After half a lifetime spent in short-term liaisons that allowed no intimacy, charismatic Irish police officer, Colin Campbell, found the love of his life. Dark-eyed, steady Joshua Abrams burned through Colin’s emotional barriers and taught him to look at life through new eyes, eyes that made room for the love and closeness he had always denied himself. Deeply in love and completely happy, their life together remains idyllic and their fiery passion for each other seems limitless.

They survive the Charlottesville 'Unite the Right' riots, though not without scars. But later that month Colin’s position with the campus police force places him in charge of an informant program designed to crack a dangerous drug ring. Fully aware of the risks, he swears to Joshua that he will oversee the program without becoming directly involved. But Colin's promise begins to crumble when he becomes the only one who can save a young Nigerian exchange student from a deadly drug lord.

Colin and Josh are back, and are dealt some tough obstacles. They have to deal with a dangerous drug case, the Charlottesville Neo Nazi march, and more. The scenes of the Charlottesville rally are as riveting as they are haunting. It was bad enough to see these events on tv, but to read about them from the characters points of view is mind-numbing. It's a tough read, but so worth it.

This story is one of two men who are each other's everything, each other's strength, but stagger with insecurities, fear and emotional distance. The writing takes us on a journey demonstrating the dangers of pride.

Overall, this book contains some tough topics, including PTSD. Without one another, Colin and Josh would be lost. But, together they can face anything.

I absolutely recommend Love's Trials, as well as Love's Magic, book 1 of this amazing series by Janice Jarrell. And I can't wait to see what she comes up with for these boys next! 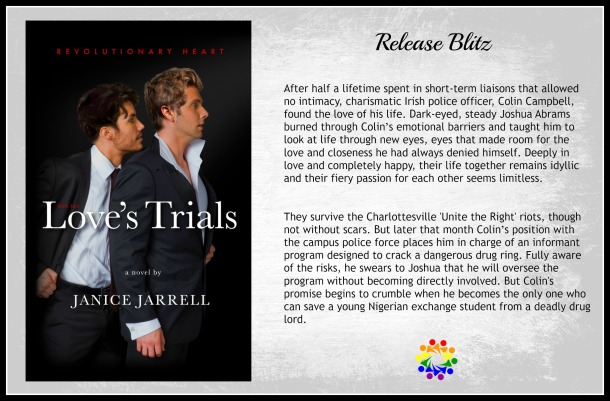 Colin drew in a breath. He released Joshua, then took his hand and drew him toward the couch. "Sit with me a minute. I need to tell you something."

Joshua chuckled and shook his head. "No," he said. "C'mon! Lenny would never do that. No. I was expecting it." His fingers tightening on Colin's. "I knew you couldn't say 'no' to them. Once they started waving the students in front of you it was a done deal."

"I know this whole operation worries you."

Joshua looked past Colin to the windows of their house, past which the Rivanna river flowed. "You can't base the way you do your job on what might or might not make me nervous," he said. "You have to do what you think is right." He turned back to Colin. "And I know you always will."

Colin leaned in and kissed him. "I didn't tell you the best part! David's going to partner with me. They want us to develop a set of prerequisites for the students' participation. It's…," he shrugged and wrinkled his nose, "it's paperwork. It's grunt work. It's no big deal."

"I see," Joshua said. "So there's absolutely no chance that you'll end up involved on a deeper level. Zero. None. Nada."

Colin lifted Joshua's hand to his lips. "Josh…," he began, then stopped. It no longer surprised him when Joshua seemed to read his thoughts and often even his fears, and since he couldn't bring himself to lie, Colin was now left with little choice. He sighed and looked somewhat sheepishly into Joshua's dark eyes. "Well…," he began.

"I promise you this," Colin said, pulling him closer. "I swear to you that I will resist any attempt to get me into the field. I will absolutely handcuff myself to my desk."

Joshua's face twisted with doubt, as he returned Colin's gaze, then he shook his head in resignation. "Colin, I believe you. And I truly believe you'll hold to that—"

"—right up to the moment when one of them says the words ‘student in danger’."

"And thirty seconds after that," Joshua said, "there'll be a white streak where Colin used to be."

"Don't bother denying it," Joshua said. He leaned in to press his lips to Colin’s then sat back, his eyes locking, once again, with the honey-green eyes of his lover. "You're the Man of La Mancha, Colin. You hear the call of glory and off you go. You don't even think about consequences to yourself. You never have. You only care about doing what's right." As he spoke this last his dark brown eyes closed and his head dropped.

"You are who you are, Colin," Joshua continued. "That's why you're the man I love."

"And no matter how this thing turns out," Joshua continued, "I would never, ever want that man to change."

My name is Janice Jarrell. I am a retired grandmother who lives in Seattle, WA. I have two children and three grandsons. I’ve been writing gay romance since I was twelve years old, only back then it wasn’t called‘gay romance’. In fact, it had no name at all. It was the fifties, and it was worth your life to admit to being gay, let alone confess to being a girl who constantly fantasized about relationships between gay men. Hell, I didn’t even know what a homosexual was. I lived on a farm out in the sticks in a tiny Michigan village and I’d never, to my knowledge, even heard the word. I just knew I loved the thought of boy on boy romance. I just knewthat there was somethinghot going on between Tom Corbett and his Space Cadets and all those guys on ‘Combat’.

I wrote slash fanfiction for 30 years, writing over 337 stories, some as short as 100 words (a drabble) some as long as a series which was over 119,012 words. I enjoy writing my stories. I enjoyed the feedback I received from my readers. It was a creative release I’d been searching for my entire life and I blessed the Internet for leading me to this artistic oasis for my spirit.

Love’s Magicwas my very first step into writing my owncharacters. I will always be grateful the slash fanfiction community for nurturing the budding author until she was ready to blossom into a fully realized novelist. It’s been an amazing thing to watch the gay community’s growth over these past twenty years. My own journey has echoed theirs in many ways, and I’m grateful to all those gay activists who fought to give the gay community the rights and privileges they always deserved.

I’m also grateful to the gay romance community, readers, authors, publishers and promoters, who are making these, my retirement years, the most creative ones of my life. When I'm not writing, I'm traveling, walking, hiking, knitting, crocheting, and weaving.

I'm very excited about the upcoming release of my second contemporary gay romance novel, Love's Trials. Those of you who fell in love with Joshua and Colin in Love's Magic are in for a treat because they are the STARS of Love's Trials, though they may not thank me for it given the very difficult 'trials' they are about to face. 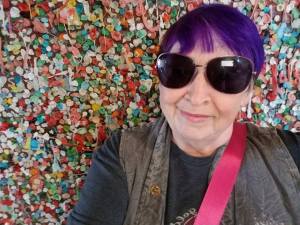 Enter the Rafflecopter giveaway for a chance to win one of three $5 Amazon gift cards and an ebook of Love's Trials. 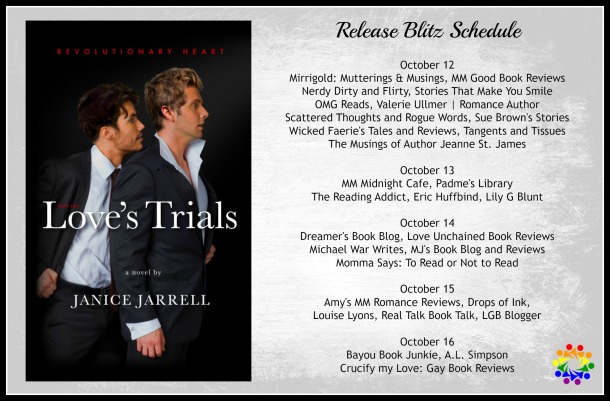