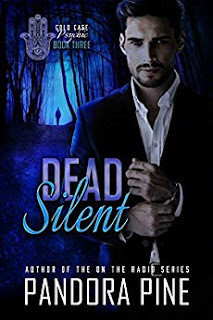 After a dramatic end to the Justin Wilson case, Psychic, Tennyson Grimm heads to a small island off the coast of Maine, hoping to clear his mind and renew his spirit. When the dead won’t let Tennyson rest, the psychic curses his gift and orders the spirits to leave him. He wakes the next morning to silence, and finds truth in the saying, "Be careful what you wish for.”
Detective Ronan O’Mara has been tasked by his boss with the chore of finding a more "sedate" cold case to investigate this time around. The handsome cop is only too happy to oblige. He chooses the twenty-year-old case of a family patriarch who was murdered on Christmas night, 1997. The only possible suspects are either his wife or his daughter, who were both with him at the time of his death. Ronan figures this one will be a piece of cake. All he has to do is get his favorite medium to talk to the deceased man's spirit.
When Tennyson reveals the truth about what happened in Maine, he’s forced to take a hard look at who he thought he was, and what his gift really means. Ronan does his best to help his lover cope with his new normal while he uses good old-fashioned police work to figure out a family who put the 'dis' in dysfunction.
Will Tennyson be able to find the key to unlock his gift, or will the spirits stay dead silent?

Dead Silent is the 3rd book in Pandora Pine's Cold Case Physic series. This one didn't grip me as much as the others, but I still enjoyed it.

Ten is currently without his gift, and he's angry and frustrated. Meanwhile, Ronan is trying to solve another dead case, which I really enjoyed. The mystery is fun and entertaining.

Overall, if you've read the other books, I suggest reading this one too. It includes some interesting twists to Ten's gift while the books try to solve their new cold case.