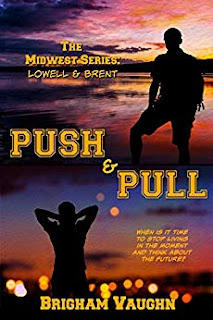 Brent Cameron has been dreaming about a road trip around Lake Michigan for years. When his best friend, Nathan, ditches him to spend the summer with his boyfriend, Caleb, Brent is pissed. Stuck between a rock and a hard place, he reluctantly agrees to take Caleb’s best friend, Lowell Prescott, instead.
Brent is a former hockey player and recently out of the closet. Lowell is an in-your-face gay guy who rebels against the limits people put on him. Tempers fly and sparks flare as they hit the road, which leads to a hot night they both regret in the morning. Despite the rocky start, Brent and Lowell slowly begin to realize they have a lot in common. As the miles disappear behind them so does their animosity. Casual hook-ups aren’t Brent’s thing, and Lowell doesn’t do relationships, so they agree to focus on their friendship.
By the time they make it to the shores of Lake Superior, their feelings have deepened past simple friendship, but neither of them have the guts to admit it. When the past intrudes, will it derail the trip and the possibility of a relationship?


Push & Pull is the second book in Brigham Vaughn's Midwest Series. As I loved book one, Bully & Exit, I was super excited to get to read this one, and it held up to my expectations.

In this book, we are treated to a fun and exciting romance between Brent and Lowell. As complete opposites, they get off to a rough start together. But, as luck would have it, they end up taking a road trip together.

Brent's spent his life as a closeted hockey player. Out now, he's still weary of spending time with the out and proud Lowell, who's graceful, likes makeup and is super rich. Personally, I love the over the top, dramatic, force of nature that is Lowell.

I found myself enjoying every second of their trip together, liking the slow way in which they start talking about their pasts, and trying to put it behind them.

Their trip is full of flirting, teasing, and some major sexual tension. Unfortunately, they also face awkwardness, confusion, grief, and avoidance.

I absolutely love Push & Pull. Brigham Vaughn does a fantastic job of taking such difference men and having them slowly fall in love. It is fun, entertaining, riveting and had me unable to put it down. It's a definite recommendation for me.