In my attempt to cover some of the attending authors for this year's GRL,I am reviewing
Finding Forgiveness by Ari McKay! 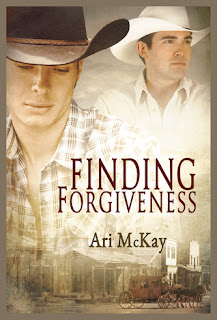 Boston in 1888 is quite urbane, but unfortunately for Gil Porter, that isn’t the same thing as being understanding. When his sexuality is exposed by the scandalous suicide of his lover, Gil is exiled to the small town of Mercy, Texas, by his domineering father, George, who believes life on Vernon Porter's ranch will cure Gil of his “unnatural” desires. Grieving and ashamed, Gil is determined to keep his distance from everyone until he can return home. To his surprise, he finds acceptance at Bent Oak Ranch, especially from Matt Grayson, the handsome son of the ranch foreman. Knowing he must fight his attraction to Matt, Gil courts a local girl, but an unexpected encounter with Matt leads to his discovery of Matt’s feelings for him. Torn between Matt and his desire to be “normal," between returning to his old life and building a new one in Texas, Gil is faced with a choice—appeasing his father or becoming the man Matt knows he can be.

I love this Ari McKay story! Finding Forgiveness is a fantastic historical romance.

Gil has been sent to the Bent Oak Ranch by his father after his ex-lover committed suicide. He plans to just keep his head down, get his work done, and count the days until he can leave. He never expected to find acceptance, or love.

Gil arrives as a man who feels guilty and worthy of his penance. With the help of those at the ranch, he learns that everyone has problems, it's just important to realize you can survive them. The scene where Matt talks to Gil about this is just spectacular.

Ends up that Bent Oak Ranch is a special place. Everyone is welcome, and everyone's accepted. And soon Gil can't imagine returning home to stuffy and proper Boston.

This story is full of guilt, hurts, insecurities, self-doubts, and healing, in addition to romance and love. Gil and Matt are sweet together, and work hard for their relationship to be a long time thing. The writing is compelling and enjoyable, as Ari McKay expertly transports us into this historical time period.

The big thing throughout this story is family. Family doesn't have to be biological. And if you have the chance to be a part of a family, accept that chance and embrace that love.

Ari McKay is the professional pseudonym for Arionrhod and McKay, who collaborate on original m/m fiction. They began writing together in 2004 and finished their first original full length novel in 2011. Recently, they’ve begun collaborating on designing and creating costumes to wear and compete in at Sci Fi conventions, and they share a love of yarn and cake.Arionrhod is an avid costumer, knitter, and all-around craft fiend, as well as a professional systems engineer. Mother of two human children and two dachshunds who think they are human, she is a voracious reader with wildly eclectic tastes, devouring romance novels, military science fiction, horror stories and Shakespeare with equal glee. She is currently preparing for the zombie apocalypse.McKay is an English teacher who has been writing for one reason or another most of her life. She also enjoys knitting, reading, cooking, and playing video games. She has been known to knit in public. Given she has the survival skills of a gnat, she’s relying on Arionrhod to help her survive the zombie apocalypse.