Strike Up The Band
by Sam Burns! 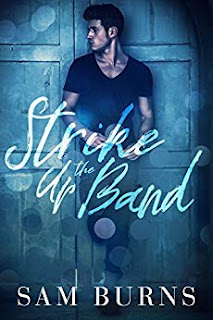 Jake McKenna doesn't want to be here. He doesn't want to be on tour, he doesn't want to be playing guitar, and he definitely doesn't want anything to do with Brian Mulholland. He's biding his time until the tour is over so that he can walk away from his music career for good.
Brian didn't ask to be here. Okay, maybe he did. Fine, you know what? He wanted this. He may not like the circumstances that have landed him in his dream job, but he's not going to let anyone ruin it for him, even if it's the insanely hot guitarist he's had a crush on since the first time he saw the band play. He will win over Jake McKenna if it's the last thing he ever does.
**This book has a heat rating of ZERO**

I love stories that involve rock bands, and Strike Up The Band is a wonderful and fun rocker romance by Sam Burns. It is book 3 in the Wilde Love series.

The band is doing well until an incident involving Jake's sister, Jenna changes everything. Jake's now keeping his distance from everyone and just waiting to quit the band. When Jenna is replaced by Brian, Jake is not happy. Brian's an ex boy band member who's bisexual. He's quiet but gifted.

I love the friendship that develops between Jake and Brian. It is realistic and just so damn entertaining. I love all of the band members, and some of the secondary characters. It's nice finding a story of a band that actually contains normal guys.

Their story contains a whole lot of guilt, grief and anger. Sam Burns really knows how to pull at my heartstrings. I appreciate the realistic way in which Jake is handled in this book. Not only are his feelings about Jenna handled perfectly, his asexuality is also wonderfully written. It's not often that I find a really well written romance involving an asexual character. Kuddos to Sam for how well this one is done.

Strike Up The Band is beautiful, memorable and gripping. I am thrilled to have discovered this fantastic series by Sam Burns!

Sam lives in the Midwest with husband and cat, which is even less exciting than it sounds, so she's not sure why you're still reading this. She specializes in LGBTQIA+ fiction, usually with a romantic element. There's sometimes intrigue and violence, usually a little sex, and almost always some swearing in her work. Her writing is light and happy, though, so if you're looking for a dark gritty reality, you've come to the wrong author.