In my attempt to cover some of the attending authors for this year's GRL,I am reviewing
Jace's Trial by JM Wolf! 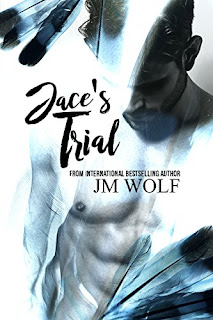 Life is a trial full of obstacles that stand between you and your goals. Do you have the courage to face your own trial? Jace Garrison was a musical prodigy at Juilliard ready to take the world by storm. Everything he could ever want out of life was unfolding right before his eyes, until everything came crashing down at once. With his muse gone, along with everything he loved, will Jace find the courage to move on?Former Navy SEAL Gerard Ramhart had always played by his family's rules and traditions. Until he fell in love with Riley Garrison. Unfortunately, before Gerard had the courage to propose to the man he loved, Riley's life was taken away. Gerard was left devastated, with only his memories of Riley and the pain of losing him to keep him going.One year after Riley's death, Gerard finally makes it to Riley's hometown in Abingdon, Virginia and meets his son Jace for the very first time. Two men grieving over the loss they shared, and during their time of heartache, something blossoms. Can Gerard help Jace find the will to live the life he's meant to have? And can Jace find his muse and accept his feelings for Gerard, despite the fact that Gerard once belonged to his father?TRIGGER WARNING:This book contains content of physical and mental abuse, grieving, and bottled emotions.* This is Book 1 in the series, but can be read as a standalone story- no cliffhangers.*

Jace's Trial, book 1 in the Trials in Abingdon series, by JM Wolf, is absolutely perfect! I love a great May-December story, and this one is as good as it gets.

Gerard comes to Abingdon for the one year anniversary of his ex boyfriend, Riley's death. And here he meets Jace, Riley's son who looks eerily like Riley.

Jace has been broken since his father died. His whole life has been about music, but he hasn't been able to even think about music without his father. He is lost, not really living, since losing his muse.

Riley may be dead, but he is discussed a lot. He was a wonderful man, so loving, who absolutely cherished his son, sister and Gerard. Gerard learns a lot more about Riley from his family and he is filled with pride for how amazing the man he loved was.

JM's writing style is positively easygoing and riveting. The dual first person narrative sucks you completely into the minds of Jace and Gerard, allowing you to feel everything along with the characters.

The town of Abingdon is a wonderful, warm place, where everyone knows everyone else's business.

Overall, it's an absolutely enthralling story where two broken men can help one another learn to live again, and learn to fly.

I am thrilled to have found Jace's Trial and can't wait to read more of this series. JM Wolf has a winner with this book!

JM Wolf never thought he would one day say that he's a published M/M romance author. Having a poet for a mother and a sister to once ran a blog, it was only a matter of time before JM discovered his writing genes. In the beginning, his sole purpose in life was to be a singer/songwriter. Writing lyrics was the first step putting his thoughts onto paper. Even while singing, JM always found time to dabble with writing little short stories but never thought too much about it.Once he reached adulthood, his music dreams left him, but not the feel of writing down what was in his mind. However, that didn't mean music no longer played a part in JM's life. His debut book The Black Feather was inspired by one of his favorite songs. Whether lyrics or love stories, you will always find JM's heart and soul in every word on paper.JM Wolf lives in Chesapeake, VA with his husband and in-laws. When he's not writing, you could always find reading a good book, spending time with the love of his life, or jamming out to music. He didn't pick the world of literature; the literary world picked him.