In my attempt to cover some of the attending authors for this year's GRL,I am reviewing
Playing Along by Louisa Keller! 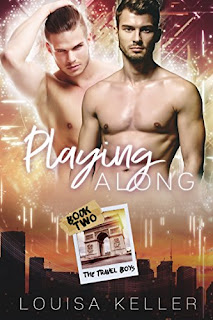 “It looks like we’ve been mistaken for the happy couple…what an unfortunate mix-up.”
Dom: I was beyond excited when my job as a video blogger landed me at a huge conference in Paris. I had barely stepped foot in the hotel when I noticed another blogger being harassed by a fan—and I was more than happy to step in and pretend to be his boyfriend so that he could get out of a sticky situation. What I wasn’t expecting? Smith Morgenstern to take me on a whirlwind romantic adventure through Paris. Between scoring the honeymoon suite after being mistaken as a French couple and sharing croissants at a charming little café, it was pretty much the most amazing night of my life…and that was before we even got around to the scorching hot sex.
Imagine my surprise the next morning when my dreamboat one-night stand turns out to be the guy I’m supposed to collaborate with on my next big video. Smith is everything I didn’t know I wanted—impulsive, snarky, and bold. But his entire career is built on making videos about the joys of sleeping around. Could someone who thrives on being unattached ever want to settle down with me?
“I’m not a romantic guy…so why does your smile make me go weak at the knees?”
Smith: I didn’t go to Paris expecting to fall hard for Dom Baker, but something about him shook me to the core. Smart, level-headed, and impossibly kind, Dom awoke emotions in me that I had never known I could feel. When we both headed home to our respective cities, I knew that I couldn’t let him go. Long late-night phone calls led to planning a visit, and before I knew it I was head-over-heels for him.
It felt like it took an eon to realize that I wanted more than just a fling with Dom—I wanted a lifetime with him. But just when I was making up my mind that I wanted to give a real relationship a chance, Dom stopped answering my calls. I was so sure that my feelings were reciprocated…but maybe I waited too long. Did I miss out on my chance at a life with Dom? Or is something else terribly wrong?
Playing Along is the second book in the Travel Boys series but can absolutely be read as a standalone. It’s a steamy contemporary m/m romance featuring fake relationship, fling-to-lovers, hurt/comfort, and long-distance themes, plus a very happy ending!

Playing Along is the second book in Louisa Keller's The Travel Boys series. And, wow, I loved it and need to read more!

Dom and Smith meet in Paris at a convention. They take advantage of some mistaken identity and spend some time together in the honeymoon suite. They are complicated together, as they are such opposites. They also live in different places, but after a week long relationship, they don't want to part.

This story is wonderfully atmospheric and enchanting. You will love all of the amazing descriptions of Paris. The journey they take to fall in love is sweet and fabulous and the men are both irresistible. Their crazy, hot attraction jumps off the pages.

I am thrilled to have discovered Playing Along, and I look forward to reading the rest of Louisa Keller's Travel Boy series!

Louisa Keller is a queer adventuress who has spent most of her life living in New England and the Pacific Northwest. While her academic background revolves mainly around French Studies and Philosophy, she has strayed from these considerably in her professional pursuits. Over the years Louisa has been a tutor, goat farmer, concierge, and freelance copywriter. She has also hiked hundreds of miles across northern Spain, volunteered at a medical clinic in Honduras, and spent many a summer living in small cabins and platform tents. When she's not off gallivanting, Louisa can be found with a whiskey-ginger ale in one hand and a Philip Pullman book in the other.