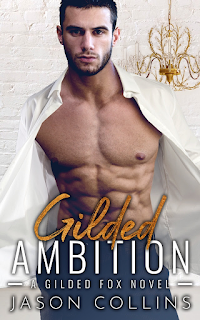 NOAH:
I’ve never been with a guy, but I’ve never met anyone like Ben.
One minute I’m enjoying my job as one of the few straight men working in an exclusive club for gay men, the Gilded Fox. The next minute I’m questioning everything.
This isn’t your typical club. For years, the Gilded Fox has served as a private retreat for some of the world’s wealthiest gay men, and they’re all whispering about Ben. The club members are saying he’s a billionaire who might take on a leadership role.
It won’t come easy. Everyone’s vying for the position, while the only position I can picture Ben in is naked in front of me.
He’s got his eyes on me. I can feel it. He sees something in me I don’t even see in myself, and he’s rubbing off on me in all the best ways. I find myself swept up in a world of glitz and glamour.
But we’re not supposed to be doing this. Employees are strictly forbidden from mingling with club members. The only problem is, I can’t help myself.
I’ve always thought of myself as straight, and being surrounded by gay men all day, you’d think I’d know for sure.
But Ben isn’t like the others. He’s something deliciously different.

BEN:
Club employees are off-limits. Especially the straight ones.
But I can’t help myself. Noah Rowe is the first thing I see as I walk through the doors of the Gilded Fox. I can’t stop thinking about him, but for now, I have to turn my attention to the club.
I’ve just been thrust into a circle I never knew existed.
I get the feeling that the men in this secret club know how to help each other out in more ways than one. However, not everything is peachy. There are power dynamics at play within the club, and the other members have heard that I might obtain a position of authority.
The problem? Some of them don’t want me to succeed.
With Noah’s help, I might be able to make my case. But what does that mean for the two of us?
He says he’s straight, but he doesn’t seem so sure.


From the very beginning, I was drawn into the world of the Gilded Fox. I am completely enchanted by this new series by Jason Collins, and I am excited about all of it's potential. The Gilded Fox is a gay club based on rules and traditions, with preserving secrecy and privacy a must.

Ben and Noah are attracted to each other when they meet, but they aren't allowed to be in a relationship. Ben is going to become a member, and Noah is staff. There are strict rules in play against such a relationship. Not to mention that all of the staff are supposedly straight.

But, holy smokes, the chemistry just jumps off the page. Their connection is strong and powerful, leaving them both feeling like they truly belong together.

This book is fun and intriguing. The writing style is perfect for this type of story, as it keeps you hooked and rooting for these two men to be a couple. They have some obstacles along the way to keep things a little angsty, but it's ultimately the connection between Ben and Noah that gives this book it's strength. And, oh man, there are a lot of smoking hot scenes. A lot! Enjoy!

I enjoyed every second of Gilded Ambition and am super excited to see what Jason Collins comes up with next for this fun series.