RELEASE BLITZ & REVIEW - Death Of A Bachelor by MA Hinkle

Cathal Kinnery is an arrogant, overeducated jerk, and Damon Eglamore is not afraid to tell him so. But Damon married Cathal’s best friend, so they have an uneasy truce. Then she passes away. Now they’re stuck together in close quarters, trying to honor her memory without shouting at each other all the time.

At first, they have no idea how to move forward. Damon is a chef, but all his favorite recipes remind him of his late wife. Cathal would love to start tomcatting around town again, except for that annoying promise he made to his best friend about looking after Damon.

Then Damon’s son comes to them for help, convinced the only way to win over his first crush is a gender-bending Shakespeare production. After that, Cathal talks Damon into taking up baking as a new way to use his talents. Next thing they know, they’ve begun a new life working as a team instead of jumping at each other’s throats. But can they trust each other long enough to make it last, or will they fall into old bad habits again?

Death Of A Bachelor is a fantastic novel by debut author MA Hinkle.

It's the story of two men, Cathal and Damon, who have disliked each other for years but are brought together in grief after losing Damon's wife, who was Cathal's best friend.

Damon's lost and unable to cope with his loss, and Cathal is there to help him out, to help him rebuild his life. What starts as anger and dislike ends with an amazing friendship, and more. First they have to deal with old misunderstandings and misconceptions.

I love Cathal and Damon. I love their story. Their banter is off the charts witty and fantastic. And their relationship with Damon's son Felix is wonderful, entertaining and fun. I truly appreciate all that Felix brings to the story.

In the end, the relationship that develops between Cathal and Damon is gripping and emotional. Cathal helps Damon to see that there's still brightness in the world, and they can mourn their loss together.

MA Hinkle does an amazing job with this story. Death Of A Bachelor is unique and powerful story of starting over, family and love.  It's a slow burn love story at it's finest.

Death of a Bachelor
M.A. Hinkle © 2018
All Rights Reserved

The man sitting at the end of the bar was older than Damon, maybe twenty-four. He had a thin, foxlike face and long, dark hair that he twirled around a finger as he wrote on a napkin, and he was wearing a Cherrywood College shirt under his suit jacket. A martini sat untouched in front of him, and his eyes were lost in thought. Definitely gay, but he wasn’t…intimidating. Unlike every other man who wasn’t on the dance floor or making out with someone else.

Damon sat next to him and gestured to the bartender for a beer. He was already a little drunk, but if he wanted to relax, he’d have to get a lot drunk. The other patron continued writing out a math problem. He finished his equation, considered it, and then scribbled the whole thing out, his brow furrowed. Scowling, he drank the martini at one go. Only then did he glance in Damon’s direction. “Fuck off,” he said, biting the olive from the swizzle stick. “I’m not looking for company tonight. I came here to get drunk.”

Damon colored, but he kept the embarrassment from his voice. “Why’d you think I came here for anything different?”

“There’s plenty of room, but you sat by me.” He looked at Damon, taking him all in, and his eyes narrowed further. The scowl fit his face too well, and Damon didn’t appreciate his scrutiny. “And guys like you don’t come here for the conversation.”

Damon didn’t care for the man’s tone. But he was the first to admit he didn’t know what he was doing—and, anyway, he was drunk enough not to care. “I wasn’t aware anyone came here for conversation.”

The man snorted. “It’s not the fucking sixties anymore. Gays can have meet-cutes as easily as everyone else.” He gestured to the bartender for another martini, rubbing his forehead.

Damon didn’t know what he meant, and he wanted to ask what kind of guy this man thought he was. But he had a feeling that would piss him off, and he was looking for a good time. Instead, he took another drink of his beer. “I’m Damon,” he said, without expecting much.

The man accepted another martini from the bartender and sipped it, looking at Damon over the top. “Cathal.”

Damon drummed his fingers on the bar, wondering if he ought to cut his losses and head to a straight bar after all. But he settled for finishing his beer in one long drink.

Cathal watched him. Not friendly watching. At this point, Damon didn’t know how to leave, so he signaled for another beer. “What were you working on?”

Cathal glanced at the napkin and made a face. “Bullshit. It doesn’t matter.”

Damon screwed the cap off his second beer and took a drink. “Who comes to a bar and does their homework?”

Cathal raised his eyebrows. His face was dangerous, but he couldn’t be that bad. Too scrawny. “Who comes to a bar already drunk?” He tilted his head to the side and smiled. Not a nice smile. Damon was starting to wonder if he had a nice smile, or if he always looked like someone had pissed in his drink. “Oh. I know. Guys like you.”

Damon frowned, feeling the first stirrings of anger. “You said that before. What do you mean?”

Cathal leaned toward Damon. His voice was calm, unhurried, but his eyes were full of fire, the sort that burns unnoticed and then flares up to take a tree down in seconds. “Guys like you. Guys who are maybe straight, maybe not, who come to one of our places for a little fucking fun and then go home to their wife or girlfriend or whatever. Never mind that it’s guys like you—guys with enough gay in them to be scared when they see one of us—who cause the goddamn trouble in the first place, because you’re not man enough to face down what’s inside you.” He drank the rest of his martini and bit off the olive again, viciously. “Don’t say you play for both teams if you’re only going to bat for one side.”

Damon blinked. It wasn’t only that he was surprised by the onslaught. He was hurt, too. “Are you this much of an asshole to everyone, or just me?” His temper was throbbing now, but he wasn’t drunk enough to punch Cathal. Even though he wanted to be, because he could never match him with words.

“Everyone,” said Cathal, like he was proud of it. He got up. “If you want a fuckbuddy for the night, that’s fine. So do plenty of guys here. But go find someone who doesn’t care if you’re throwing the rest of us under the bus, because I do.” He reached to tuck the napkin into his pocket; Damon grabbed his wrist, even though he had nothing to say. Cathal shot him a look that promised every possible bad thing in the known universe. And some unknown things.

Cathal smiled that prim, insipid smile again. “Yes, you fucking are.” He walked off without another word.

Damon sat there, stunned. Then he turned around and finished his beer at a go. 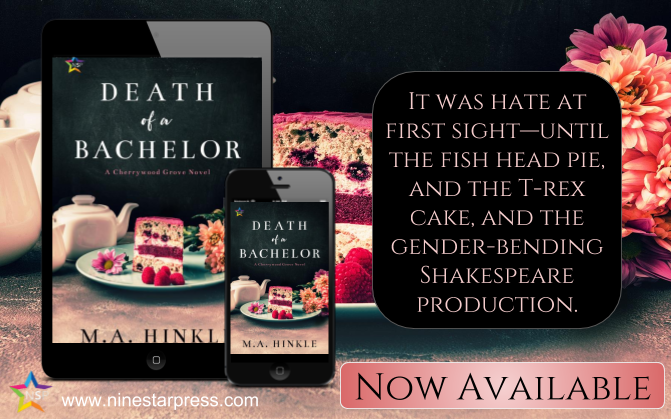 
M.A. Hinkle swears a lot and makes jokes at inappropriate times, so she writes about characters who do the same thing. She’s also worked as an editor and proofreader for the last eight years, critiquing everything from graduate school applications to romance novels.