In my attempt to cover some of the attending authors for this year's GRL,I am reviewing
His Lover's Vow
by Giovanna Reaves! 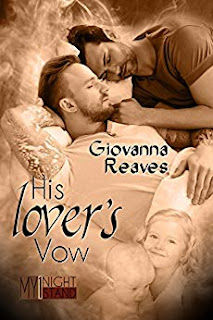 A budding friendship that leads to a one-night stand and a second chance at love.
After the death of his wife, Lucas Hamilton put finding love behind him, his only focus on being there for his young daughter. As the CEO of Hamilton Enterprise, Lucas has more on his plate than he could handle without adding a relationship in the mix. He promised his late wife that when love came around, he would not let it pass him by. Which is why Lucas was shocked to find himself attracted to Tucker Stevens. Does he ignore his attraction or keep the vow he made to his wife?
Tucker Stevens has mourned the death of his wife and daughter for so long that he's forgotten what love is. As an FBI agent, Tucker used work as a way to keep himself busy, forgetting the promise he made to his wife to never give up on love. Even though most of his family and friends are in love, married, and living their lives, he still didn't recognize or believe he had the right to fall in love. That was until Lucas Hamilton who found a way to break through the wall he built around himself.

His Lover's Vow is an interesting romance by Giovanna Reaves, a new to me author.

I absolutely love the beginning of the book, as the pull between Lucas and Tucker is strong and they each don't know what to do about it. Both men have lost their wives and have never been attracted to a man before. This part is awesome! I love their connection and the will-they-won't-they action.

The second half of the book is all action and suspense, as their lives are in danger. I like this part enough, but it's definitely an abrupt shift in the storyline and the pace.

I adore Lucas's daughter and her relationship to Tucker. It just brings out all the feels.

I will admit to not having read the prior books in the series yet. Yes, I said yet. There are things I find confusing in this story, since I don't know who everyone is. But, this book intrigues me enough that I definitely want to go back and start at book one. For one, the men in this book can get pregnant, yet it is because of science and evolution. It is not an Omegaverse world. I want to start at the beginning and read about the other characters who are mentioned.

I am glad to have found this Giovanna Reaves book, but I would recommend starting at the beginning of the series.

Giovanna (Gia) Reaves is the alter ego for a dreamer. A dreamer who spends her days and nights creating worlds from her imagination. Being an avid reader, allowed Gia's imagination to take hold. With the encouragement of her loved ones, Gia has given into the voices in her head, putting their words and wolds to paper. Gia is also a mother, wife and veteran. Gia is also a serious chocoholic and loves to read MM Romance just as much as she loves writing them. The sweeter the better, especially, on a snowy or rainy day is how she like to fill her days when she is not writing. https://www.facebook.com/GiovannaReaves/Website-www.GiovannaReaves.comBlog-http://www.giovannareaves.com/gias-blogsFacebook Readers Group: https://www.facebook.com/groups/GiovannasSecretOneNighters/Newsletter: http://eepurl.com/cMDioLEmail-giovannareaves@gmail.com Twitter:@GiovannaReavesInstagram: GiaReaves