In my attempt to cover some of the attending authors for this year's GRL,I am reviewing
Only Need You
by JD Chambers! 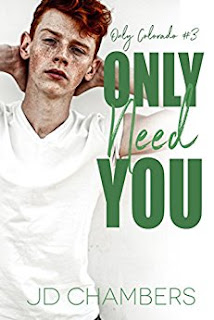 
BLURB
"I am still trying to prove that I am not a hot mess. The last thing I want is to attach myself to someone in even greater need of a personalized TED talk than me."
Kieran Jones is perpetually ten steps behind in life. Whether it's his best friend's advice on how-to-gay properly since he was a little late to the coming out party, another friend giving him a discount on rent so he could escape his horrible roommate situation, or his best friend's boss rescuing him when his car won't start, Kieran's life isn't just a hot mess. It's a blazing disaster.
"I don't think I've been giving off greater sad sack vibes than normal, but the more time I spend around Kieran, the more I want things that I can't have."
Ted Olson may not be the life of the party, but he is steadfast and dependable, and that will have to do. He's always looking out for others - his employees, his nephew, and the adorable redhead who hangs out at the store and is way too young for him. It has been almost a decade since his last serious relationship, and Ted is tired of being alone.
When Kieran and Ted end up on a blind date together courtesy of a dating app, they realize a mutual attraction has been lurking behind their growing friendship. But Ted can't believe someone as young and pretty as Kieran would want a boring, old, video game store owner. And Kieran has never been with a man before and doesn't trust his own instincts. Both men will have to break free from their insecurities if they want to be what the other needs.

Only Need You is the 3rd book in the Only Colorado Series by JD Chambers. It can easily be read as a standalone. But I will warn you, I found myself wanting to read the rest of the series.

First of all, I loved the characters in the book, both the main characters, Ted and Kieran, as well as their friends and family. I found them all to be a group I'd want to hang out with, thus reading about them was fun.

In this book, the story centers around Ted and Kieran. And for a great Bonus - Ted is turning 40 and Kieran is much younger. I always love a good May to Sept book!

Ted is an older man who runs a Video game Store. Kieran spend a lot of time there since his friend works there. Ted tries to fight his attraction to the younger man, thinking he has nothing to offer Kieran.

Meanwhile, Kieran is struggling in many areas. His car has problems. He needs a new apartment. He works for a Horrific boss who tries to exchange sex for work security. Oh, and he's also newly out of the closet.

When they meet up via a dating app, they realize that they are both attracted to each other. But Ted wants to make Kieran wait a while before things get physical.

Add in some entertaining friends, some work issues for Kieran, a deaf nephew of Ted's and you get a wonderful, fun, love story.

JD Chambers wanted at various times to be Indiana Jones, Pat Benatar, and Wonder Woman when she grew up. She never considered writing down the stories she crafted in her head. They provided nothing more than entertainment for long drives or sleepless nights, until one particular story insisted it didn't want to reside only in her noggin. She hasn't stopped writing since.JD finds unlikely heroes, humans courageous enough to be themselves, and spreadsheets incredibly sexy -- the last one much to her husband's chagrin. Together, they raise three teenagers and the world's most mellow Chihuahua on the Oregon Coast.