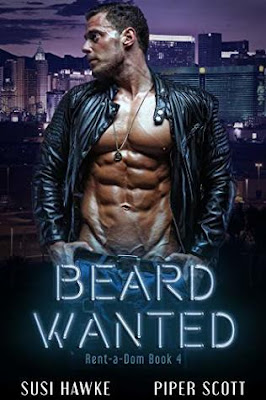 Omega looking for alpha for... unusual request. Must be physically impressive. Please inquire for further details.Christian Kelley is down on his luck--big time. After moving to Las Vegas in the hopes of becoming an entertainer, he's been met with nothing but rejection, so when a friend suggests he sign up with Rent-a-Dom as a service provider, he's eager to give it a shot. While more naturally submissive than dominant, Christian is sure he can pull off the act well enough... at least, until the founder of Rent-a-Dom himself contacts him with an unusual proposal, and his world turns upside down.Monty Mills, the mysterious founder of Rent-a-Dom, has a problem he can't fix. With Rent-a-Dom's fifth year anniversary on the horizon, he sees potential for exposure like never before. The problem? He'll risk Rent-a-Dom's credibility if he shows his face in public. What he needs is a beard--someone who can make the world think he's someone he's not.Someone like Christian Kelley.Sparks fly when Monty and Christian meet, but with Monty's business riding on their success, and Christian's future hinged on this performance, love isn't on the agenda. Is it?This final installment in the Rent-a-Dom series contains mpreg, D/s elements, and is intended for 18+ readers. Warning: Don't read unless you like fun books with mysterious and powerful omega Doms, bubble bath disasters, rugged alphas with secret piercings who long to submit, and scenes that'll make Vegas temperatures cool in comparison. But then again, this is a Susi Hawke and Piper Scott collaboration--you already knew to expect that, didn't you?

Beard Wanted is the fourth book in the Rent A Dom series by Susi Hawke and Piper Scott.

This time we get to read about Monty, the owner of Rent A Dom, as he himself needs to hire a Dom. When Monty hires Christian, he never expects to mix business with pleasure, let alone fall for the man.

A major theme in this story is confidence. One can't really fake confidence. And sometimes it takes love to finally find your confidence.

Monty's spent his life keeping others at a distance. He struggles to drop his walls and let his heart feel anything again.

Monty and Christian's story involves a whole lot of sexual tension, seduction, and a irrepressible need. They have to deal with denial, submission, and restarting Monty's dead heart, which will require a whole lot of strength.

Don't miss out on Beard Wanted if you enjoy hot stories, as this one has sparks and passion in spades! The writers treat us to the couple's insatiable need for one another, as well as their strong emotional attachment. It also has a lot of hot piercings, and a large, tough bottom.