In my attempt to cover some of the attending authors for this year's GRL,
I am reviewing 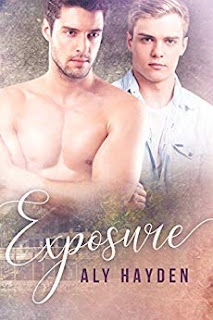 Sam Hayward's parents think he has a boyfriend. And he does... in his dreams. But when they insist Sam bring his partner to the annual Labor Day family reunion, his options are to either admit it was all a lie or find a stand-in in a hurry. The trouble is that his lies have all been based on one very real man.
Ben Matheny has been hurt before. When he's bribed into playing a part by his friends, he fleshes out Sam's dreams, but it's like flying too close to the sun. He's always had a crush on Sam, and now they're going to the Hamptons to spend a weekend pretending they're lovers, everything is getting harder.
When Ben uncovers another lie Sam has told - that Ben is every bit as rich as Sam is - things begin to unravel. If Sam isn't happy with who Ben is, Ben can't stick around to get burned again.
With their hearts on the line, the two must fight for their dreams as the pressure mounts. It would be so easy to admit that it was all a sham, but some dreams are worth the risk.


Exposure is the first book in Aly Hayden's Drawn Together series. It is a fun and wonderful fake boyfriend romance.

Ben and Sam become fake boyfriends to fool Sam's family, as Sam needs them to stop pressuring him to date. Both men have liked each other, but never told the other.

During their time together, they have to deal with their families being completely opposite in personality, as well as lifestyle and wealth.

One of my favorite moments is Ben in the swim trunks!  Omg. Loved it.

Their journey is full of fear of rejection, hesitancy, courage, making changes, and bravery, in addition to lies and deceptions. Their story is interesting, flirty, and completely entertaining.

I am happy to have discovered Exposure and will be reading Aly's other books!

Aly Hayden has loved writing ever since they learned to pick up a pencil. As a child, they used to write short stories, then progressed to novels of various genres, none of which were ever published - for a good reason.  They started writing fanfiction in 2011, publishing on Archive Of Our Own. After finding M/M romance in 2012, they fell in love and made it their mission to write one of their own one day. When Aly isn't writing, they can be found playing with their lovable Yorkie and watching old reruns of House Hunters.