RELEASE BLITZ & REVIEW - I Wished For You by Colette Davison

Book Title: I Wished For You 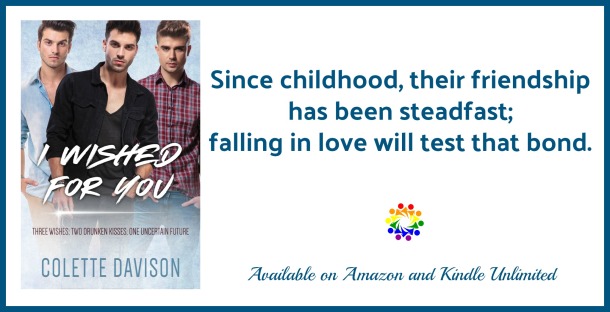 Seb wants to be happy.

Matt wants to find ‘the one.’

Seb didn’t plan to kiss Matt and Connor, but he doesn’t regret it, even if it has changed their friendship forever.

Matt has never considered dating a man before, let alone two. Despite his confusion, being with Seb and Connor feels right.

Connor’s potential fate has stopped him living and loving. Can he face his fears to be with the men he loves?

I Wished For You, by Colette Davison, is a fantastic menage romance between three best friends. It includes some GFY, coming out scenes, some family issues, and a whole lot of emotional moments.

Seb, Matt and Connor have been best friends for years. But, until one drunken kiss makes them rethink their feelings, they've never crossed the line into becoming more. What follows is a wonderful story of three men who are clearly met to be together, as they cross the line into becoming a throuple. It's an emotional journey as they have some serious talks, some adjustments to make, and some family members to come out to as well.

Their road to happiness is not an easy one, but it's definitely entertaining and will keep you on your toes. I found myself immediately swept into the action and all the feelings involved. The author does a wonderful job of giving a good background to each character, and making us feel their emotions.

And, yes, there are some steamy moments, as well as tender moments.

As I've been reviewing quite a few Colette Davison novels, I am starting to really love her books. I Wished For You is wonderful. I adore this trouple and enjoyed every moment of their story.


Matt adjusted his jogging bottoms and leaned back against the sofa. The next words popped out of his mouth unfiltered. "I could do with a blow job."

Seb snorted out a loud laugh. "Too much information." He patted Matt's shoulder. "But hey, if you're desperate, I don't mind obliging." Seb's laughter trailed off into a nervous chuckle. "Umm… that was a joke."

“Yeah, yeah, of course." Matt couldn't look at Seb. A week ago, he'd have taken a comment like that and ribbed his friend with it mercilessly. Now, he wasn't sure at all that it had been meant in jest. He wasn't even sure that he wanted it to be a joke. He rubbed his jaw, clearing his throat again. "What would you do if I said yes?”

Seb twisted on the sofa so he was facing Matt. "You're not going to say yes."

"What if I did?" Matt kept his stare on the ceiling, but he was still able to see Seb shrug out of the corner of his eye.

Seb's reply was so matter-of-fact that it sent a chill running up Matt's spine. It did nothing to ease the pressure in his cock. If anything, blood pumped to it faster.

"Really?" Matt asked. Why the hell was he still talking? It was like he was engaged in a game of chicken with Seb, trying to see which one of them would back down first. He had no idea how far his head, or his cock, was willing to take it.

“Sure, why not? It's just a blow job, right? It wouldn't mean anything.”

"Wouldn't be the first time I've sucked off a friend."

Colette’s personal love story began at university, where she met her future husband. An evening of flirting, in the shadow of Lancaster castle, eventually led to a fairytale wedding. She’s enjoying her own ‘happy ever after’ in the north of England with her husband, two beautiful children and her writing.