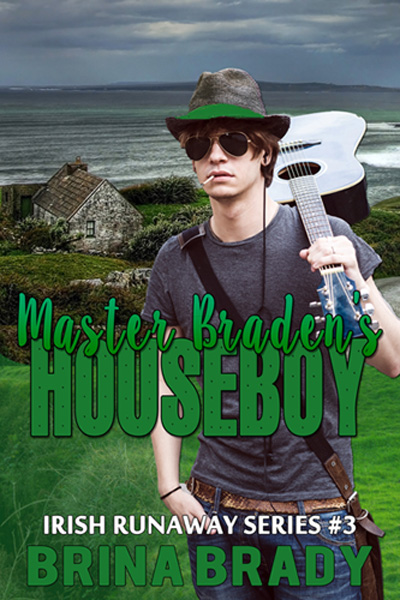 
Reece was a guitar player and a singer at his grandfather’s pub in Dublin until someone betrays his secret. Once he was a happy and carefree young man, who finds himself on the streets and homeless.

He meets a handsome stranger, who gives him hope that the world still has people with compassion, until he discovers the man may have compassion, but he is no softie. Conner hires Reece as his houseboy.

Much to his shock, Conner Braden isn’t only a garda (Irish police officer), but he is also a Dom! The two men are complete opposites, but that doesn’t stop Reece from wanting to win his heart.

What happens when Master Braden blurs the lines between employer and Dom when Reece is his employee?

I have a like/hate relationship with Master Braden's Houseboy. I would have given it four stars if it was the first book in the series. But, as Brina Brady made this book three in the Irish Runaway Series, I am giving it three stars.

In Master Braden's Houseboy, we follow along as Connor takes in Reece to be his houseboy. His plans are to take him as his sub, but he'll have a lot to do before Connor will do so. Meanwhile, Reece desperately wants to be Connor's sub and will do anything to get there. What follows is a fun tale of Connor teaching and training Reece to be his sub.

As I said, I really would have liked this book a lot had it been the first in the series. Since it's book three, we already know too much about how things will end. Why? Because it takes place prior to book one. As a result, there is one huge part of the story that breaks my heart way too much, as I know how it ends.

As a standalone book though, I enjoyed it much more. I was definitely mad about the smoking issues though, as it just seems so niave of Connor to react the way he does.

Overall, Master Braden's Houseboy is a fun book on it's own, with a good plot and good writing. Brina Brady definitely has a good series on her hands with The Irish Runaway Series.


I am from Huntington Beach, Ca. I taught various subjects at a Continuation High School in Los Angeles, California for 27 years. I obtained a Bachelor of Arts Degree in history, Secondary Social Science Credential and a Master's Degree in Secondary Reading and Secondary Education from California State University, Long Beach. I also enrolled in some creative writing classes at UCLA. You can contact me at brinabrady@gmail.com.