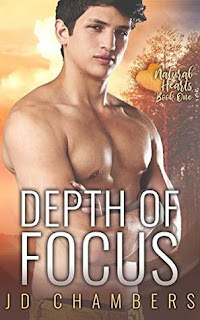 Growing up, Travis hated his small town, Slat Creek, and everyone in it. His only goal was to escape for good, and at the age of twenty-one, he thought he had finally achieved it. But when his sister struggles with the death of their mother, he has to return home to care for her. Whitman grew up believing in the healing power of books, but it wasn't until he moved to a small town in Oregon as their new librarian that he sees that belief in action. He's living his dream professionally. But personally, he's lonely and wondering if he made a big mistake, until he meets a sad teenager and takes her under his wing. Might an observant and helpful librarian be enough to tempt Travis to stay?

Depth of Focus is a great story by JD Chambers, as it's emotional, heartfelt and beautiful.

Travis has been sacrificing his own life to raise and protect his sister, Caitlyn. The death of their mom changed their life instantly. Next thing Travis knows, at the age of 21, he's parenting his sister, working two jobs and keeping a close eye on his suicidal sister. The poor guy doesn't get a break. Ever.

When Whitman comes to town as the new librarian, his plans are to revive the library. In the long run, he not only changes the library, but also Scott's life, as well as Caitlyn's. Through working with Whitman, Caitlyn finds a purpose with her life. This part of the story is wonderfully touching.

Travis is a Native American who's always longed to leave his small town. Not only is he tired of everyone being in his business, he also thinks there is nothing for him there. With the help of Whitman, he starts to discover the small ways in which he actually is a part of this town.

Whitman and Travis are super sweet together. They are two broken men who really help one another, as they strive to survive. Their love is a riveting slow-burn.

Overall, Depth of Focus gifts us with a beautiful glimpse into the importance of family, as well as what family means. It's an emotional rollercoaster that has touched me to my soul. I'm excited to see what JD Chambers comes up with next in this series.