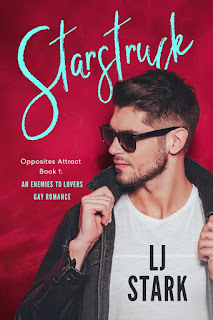 Faking a marriage to my worst enemy shouldn't be this easy. Peter. I was a working actor struggling to make rent when I scored a part in Aiden Hunt's latest blockbuster.
Too bad the man himself turned out to be rude, abrasive and annoyingly cocky. But at least I'd never have to see him again after filming.
Or so I thought.
One drunken wrap party and two gold rings later, I'm married to the bastard and we need to sell a fairytale romance to the tabloids, his legions of fans, and the world.
Falling for him in the middle of all this should be out of the question.
But there's more to him than I thought, and if it turns out that he really does have a heart underneath his bespoke suit?
Well, then I'm in trouble...
Aiden. Hollywood has a bad habit of chewing up young, starry-eyed actors and spitting them right out. That's what I thought would happen to Peter Czerny, and I didn't care.
He was rude, self-righteous, and...distracting.
Ending up married to him was an inconvenience, but I could use it for my own gain.
I just didn't bank on Peter getting under my skin. He slipped into my life like he's always belonged there, and we have an attraction that my body can't deny.
I just need to get him out of my system.
Then we can both go back to our two separate lives.
Somehow, playing a role has never felt this complicated.
This is a standalone, 60k+ Enemies-to-lovers fake marriage contemporary MM romance with an HEA and no cheating.


Starstruck is a charming and gripping enemies to lovers romance by LJ Stark. It's exactly what I hope for when I hear about a Hollywood romance, a fun story!

Peter and Aidan meet during Peter's audition for Aidan's new movie. The two certainly get off to a bad start. As things go on, their story is fun, flirty, witty and entertaining. It is a perfect book when you want a happy, light book.

To me Starstruck is an absolutely must-read, and this LJ Stark gem will be added to my re-read often list.