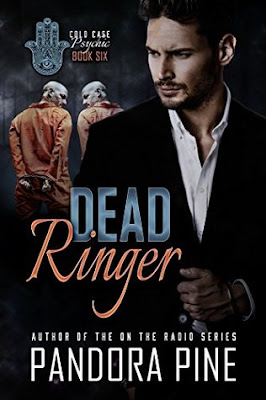 Cold Case Detective and newlywed, Ronan O’Mara, is sitting on top of the world. When he returns to work after his honeymoon, he finds more waiting for him than a stack of dusty cold case files. Hidden in the mail on Ronan’s desk is a letter from Tank Hutchins, aka The Riverside Ripper. Convicted of murdering a woman three years ago, Tank claims he is innocent and asks Ronan and Tennyson for their help in proving who really committed the crime: his twin brother, Tim.
Psychic, Tennyson Grimm, is reluctant to meet with the convicted murderer who’s placed his faith in Ten’s gift. When Tennyson realizes Tank is innocent of the crime for which he’s serving twenty-five to life, he knows that he and Ronan have to do whatever it takes to set things right.
Together with Tank’s private investigator, the mysterious Jude Byrne, Ronan and Tennyson retrace the steps of the original investigation hoping to find the one piece of evidence that will get Tank’s conviction overturned and bring the real killer to light.
When new evidence leads them to believe there’s a larger conspiracy at play, will Tennyson and Ronan be able to find the killer before he returns to complete his diabolical plan?

The humor is plenty, as Ronan and Ten are as snarky and funny as ever. I have really come to love this men immensely! And we get plenty of wonderful moments with them.

The turkey cook-off, and the babies are absolutely hysterical. I can only hope we get plenty more of these antics in the future.

The murder case is again an interesting and entertaining mystery. It's a different twist on the usual, as this time a convicted man contacts them for help, claiming his innocence.

If you've enjoyed the other books in this series, you'll love this one too. As Pandora Pine get further and further into this series, I am liking it more and more.