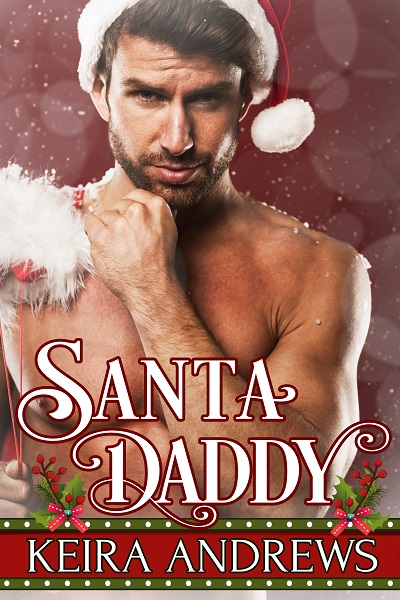 Hunter Adams is hopelessly adrift after college. He’s still a virgin, can’t find a real job, and has no clue what to do with his life. In desperation, he returns to his humiliating old job as an elf at the Santa's Village in his hometown's dying mall. The Santa on the job is an unexpectedly sexy lumberjack, twice Hunter's size and age. He makes Hunter feel very naughty—too bad he's grumpy and intimidating.

Years after the tragic death of his partner, Nick Spini has his beagle and long, hard days on his Christmas tree farm. That’s plenty. But he can’t refuse a loyal friend’s plea for help and finds himself filling in as Santa at the local mall. Despite Nick's attempt to stay aloof, the beautiful, anxious young man playing elf brings out his long-dormant daddy instincts.

When a surprise blizzard traps them alone in Nick’s isolated forest home, their attraction burns even brighter. Will they surrender to the sizzling connection between them and find the release and comfort they crave?

When Nick fills in for the mall Santa, he meets the hot elf, Hunter. The two can't help but to oogle one another, despite the 20 years between them.

Hunter's only home for a short time, ready to leave soon to find a real job now that he's done with college. Nick's just surviving, still reeling in the loss of his ex-husband. He's been lost in his loneliness and grief, working too much to try to forget his problems.

Their story is beautiful and tender. Nick wants to teach and soothe Hunter, despite knowing that Hunter will cause him trouble. Hunter needs to get over his anxious self doubts. And Nick wants to help him by grounding him. He wants to be his Daddy. And it ends up that Hunter is turned on by that idea.

What follows is some holy hotness between the two, as well as a fun and interesting love story.

As usual, Keira Andrews delivers with the perfect mix to create a heart-felt, and steamy story.

After writing for years yet never really finding the right inspiration, Keira discovered her voice in gay romance, which has become a passion. She writes contemporary, historical, fantasy, and paranormal fiction and — although she loves delicious angst along the way — Keira firmly believes in happy endings. For as Oscar Wilde once said:


“The good ended happily, and the bad unhappily. That is what fiction means.”