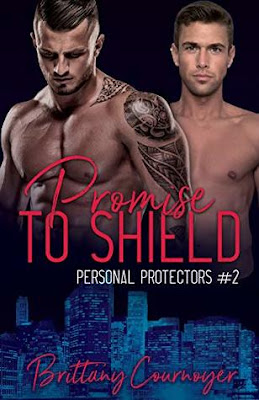 Brice ~
Life hasn’t always been easy for Brice. With his own mother abandoning him when he was a teenager, and his father having a dangerous job, life has been lonely. That is, until his father decides he needs a bodyguard he doesn’t want. So why does he find himself noticing how attractive the broody bodyguard is? And why does he want him to stay, after all?
Carter ~
Staying out of sight is Carter’s specialty. It’s something he learned while in the military and something he put into play while being on the run. Staying in one spot for too long isn’t something that sets well with the surly man. Initially, keeping an eye on the young man isn’t exactly what Carter wants to do, but now something isn’t letting him leave.
Personalities clash and tempers rise with these two men, making every day they’re together more challenging than the last. As the days pass, more secrets are revealed as their feelings for each other grow stronger. But when one man’s past comes back to haunt him, each man will stop at nothing to protect the other.
*Promise to Shield is Book 2 of the Personal Protectors series. It is intended for a mature audience with adult situations and language. Promise to Shield also mentions cutting and past abuse.*

I've been waiting for a while to read Promise To Shield, the second book in Brittany Cournoyer's Personal Protectors series.

Brice's father, Larry, is an absentee dad, always working and emotionally distant. Thus, Brice is pretty much alone in the world. But then Larry hires Carter to protect Brice, setting off a series of events that include some danger, some steamy moments, and falling in love.

I love the evolution of these complex characters in this story. Initially, Carter sees Brice as a young pain in the ass, since this is how Brice treats him. Over time, they are able to understand the other, and start caring more than they ever expected.

I have come to love Brittany Cournoyer's writing style. She manages to tell a wonderfully emotionally story, with a lot of character growth, all while including some suspense and danger.

Carter and Brice are a lot of fun, in addition to their sizzling chemistry together.

In addition, we also get the pleasure of past characters. Catching up with them is a whole lot of fun, as well as intriguing.

Promise To Shield is everything I was hoping it would be, thrilling, gripping and romantic. Now I can't wait for book three!