Worth Fighting For (Heart of the South #3) by Wendy Qualls 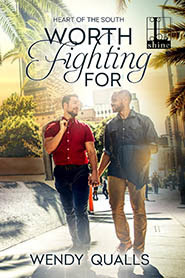 For two gay men in the Deep South, fighting for love and family can lead to one beautiful, sexy, and unexpected knock out . . . In college, an “are you sure you’re gay?” experiment with his (female) best friend left Sterling Harper married with a baby on the way. Eleven years later, his life is flipped upside-down—his wife has died, his “little boy” is transitioning to her new life as a girl, Alexa, and his embittered in-laws have proven too transphobic to babysit for the summer like they’d planned. They’re fighting for custody of Alexa, though, so Sterling can’t afford to give them more ammunition. If only there were a nice, conservative, trans-preteen-friendly nanny available on short notice . . .Jericho Johnston doesn’t do “conservative,” but Alexa takes to him immediately. He’s got a teaching job lined up for the fall, a killer smile, and loads of charisma . . . but he is not going back in the proverbial closet. It doesn’t take long for the two men to go from comrades-in-arms against their rarified community to two men in love. This kicks off the looming custody battle with Sterling’s bigoted in-laws, though, and the idea of two gay men raising a trans daughter isn’t going over well with anyone. Now, with so much to lose, Sterling and Jericho must fight harder than ever—for themselves, for Alexa, and for their future.


Worth Fighting For by Wendy Qualls is a beautiful and tender romance.

I am shocked at how much the author manages to pack into this story. Sterling needs to hire someone to care for his transgender daughter. Luckily he finds Jericho who completely understands Alexa and helps her a lot. And luckily for both them, they have a mutual attraction. Their flirting is cute, their explorations are hot, and they definitely complement one another well.

Of course, they also have to deal with bigoted and transphobic in laws, some sad moments for Alexa at school, and a custody fight.

The writing is good, flowing nicely and keeping me interested throughout. The topics discussed are done with a lot of knowledge and understanding, and without any preaching.

I definitely recommend Worth Fighting For to anyone who loves a sweet tale.