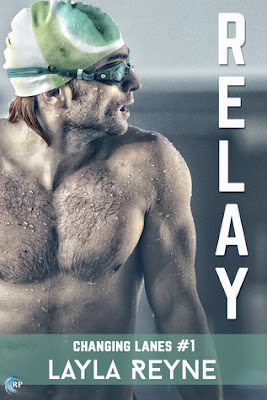 Captain is not a title Alejandro “Alex” Cantu takes lightly. Elected by his teammates to helm the US Men’s Swim Team, he proudly accepts the role, despite juggling endless training, team administrative work, and helping out on the family farm. And despite his ex-lover, Dane Ellis—swimming’s biggest star—also making the Olympic Team.
Dane has been a pawn in his celebrity parents’ empire from crib to pool, flashing his camera-ready smile on demand and staying deeply in the closet. Only once did he drop the act—the summer he fell in love with Alex. Ten years later, Dane longs to cut his parents’ strings, drop his too-bright smile, and beg Alex for another chance.
Alex, though, isn’t ready to forgive and forget, and Dane is a distraction he doesn’t need on his team, until an injury forces Alex to accept Dane as his medley relay anchor. Working together, their passion reignites. When Dane’s parents threaten reprisal and Alex is accused of doping, the two must risk everything to prove Alex’s innocence, to love one another, and to win back their spots on the team, together.

Relay is an enjoyable second chance romance by Layla Reyne.

I always enjoy a good romance involving athletes, and especially Olympians. Alex's a closeted swimmer on the Olympic swim team. Suddenly, his ex-lover, the press favorite, Dane, is on his team.

Their reunion is not a fun time for either, as Alex is far from welcoming to his new teammate.

Dane's spent his life as his parent's puppet. He does and says what he's told. He's closeted, as his religious parents would never allow their darling son to be gay. Dane's tired of pretending, living his life according to his parents' plans.

Their story includes some scandal, betrayal and jealousy. People start meddling and careers are threatened.

Relay's a wonderful reminder that living your truth can help you find real happiness.