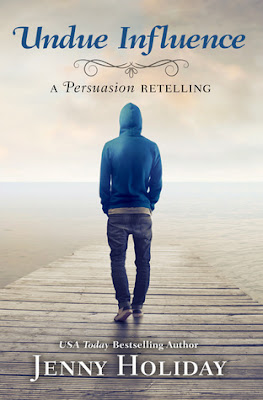 Second chances only come around once.

Eight years ago, Adam Elliot made the biggest mistake of his life. Now that mistake is coming back to haunt him. His family’s beloved vineyard has gone into foreclosure, and the new owner is the sister of the only man he’s ever loved—the man he dumped under pressure from family and friends who thought the match was beneath him.
When Freddy Wentworth, aka the bad boy of Bishop’s Glen, left town with a broken heart, he vowed never to return. But a recently widowed friend needs his help, so here he is. He’s a rich and famous celebrity chef now, though, so everyone can just eff right off.
But some things are easier said than done. Despite their attempts to resist each other, old love rekindles—and old wounds reopen. If they want to make things work the second time around, they’ll have to learn to set aside their pride—and prejudice.
This modern retelling of Jane Austen’s Persuasion is a standalone novel that can be enjoyed by Austen-philes and by those allergic to the nineteenth century.


Undue Influence is a modern day retelling of  Persuasion, but with an M/M pairing. Thank you Jenny Holiday for this modern version. That said, don't focus on the original work, instead just enjoy this tale for what it is.

I love Adam, who's struggling when his mom and sister run his family vineyard into foreclosure. And Freddy, ahh Freddy. He's now back in town as a celebrity chef.

It's with the use of frequent flashbacks that we learn of Adam and Freddy's meeting, dating and breaking up. All of these scenes are informative, as well as entertaining.

Adam's best friend, Rusty, is the car mechanic by day, drag queen by night. As the only one who seems to care about Adam, he's also the one who convinced him to make the biggest mistake of his life.

Overall, it's a cute story of second chances.