Zero Warning (Asher Radman: By the Numbers 0) by John Charles 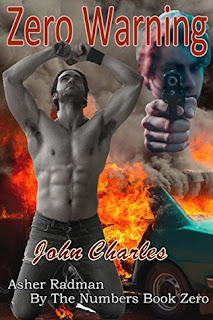 When FBI agent Mateo Hachman took the undercover assignment, he knew the risks.  Infiltrate the Proveedores Consortium and get enough on them to bring down the inner circle.
It took almost five years, but Mateo not only infiltrated the consortium, he was elevated to the prestigious inner circle.  From his vantage point, he provided enough evidence to bring down Demarco Sanchez the head of the Proveedores as well as over a dozen high level members.  For decades, Sanchez was the target of every agency in the US.  He had his fingers in everything from drugs, to contraband, to counterfeit designer handbags.  But they never could gain enough evidence to arrest him.  With Mateo's testimony, he received multiple life sentences.  He would never see the light of day again.
When henchman Abraham Garceau was sentenced for multiple counts of murder, he swore he'd find a way to torture Mateo until he begged to die.
Eight years later, Mateo had a new name, new career, and new life.  In those eight years, he never stopped looking over his shoulder, never let his defenses slip, and never got close to anyone until he met Isaac Konners.  Konners was everything he wanted in a partner.  Getting close to Isaac would mean breaking his personal vow and endangering an innocent person.  Yet, Isaac wormed his way into his heart, took hold, and wouldn't let go.
In what appeared to be an inside job, Garceau escaped from a prisoner transport van and disappeared.  Several weeks later, a video played on every news channel.  A close-up of Garceau looking into the camera filled the screen.
"This video is for one person and one person only - Mateo Hachman.  I promised I'd get you no matter how long it took and now that I'm free of that f*cked up prison and those bullsh*t guards; I intend to keep my promise."
Suddenly Mateo was pulled into the worst nightmare anyone could have imagined.  The one man who could and would find him was promising to do just that.  Revenge was strong with Garceau and his word was law.  He never broke his word.
Did he know where to look?  Did he know Mateo's new name?  What about his new looks?  And what about Isaac?  How could he protect Isaac from that lunatic?

Zero Warning is an exciting and steamy, action packed book by John Charles.

After seven long years, Scott has finally started to feel safe. Then he discovers that Mateo is out of jail and after him.

Scott and Isaac are adorable together, as they're sweet, funny and cute.

Overall, the story is short, fast paced and entertaining. It flows smoothly, and is well written.