Edge Of Living by HL Day 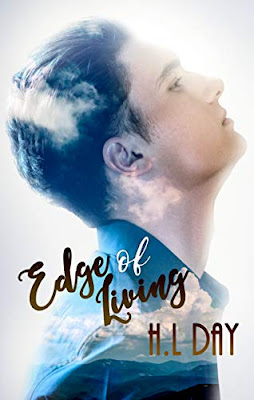 Sometimes, death can feel like the only escape.
It's been a year since Alex stopped living. He exists. He breathes. He pretends to be like everyone else. But, he doesn't live. Burdened by memories, he dreams of the day when he can finally be free. Until that time comes, he keeps everybody at bay. It's been easy so far. But he never factored in, meeting a man like Austin.
Hard-working mechanic Austin has always gone for men as muscular as himself. So, it's a mystery why he's so bewitched by the slim, quiet man with the soulful brown eyes who works in the library. The magnetic attraction is one thing, but the protective instincts are harder to fathom. Austin's sure though, that if he can only earn Alex's trust then the two of them could be perfect together.
A tentative relationship begins. But Alex's secrets run deep. Far deeper than Austin could ever envisage. Time is ticking. Events are coming to a head, and love is never a magic cure. Oblivious to the extent of Alex's pain, can Austin discover the truth? Or is he destined to be left alone, only able to piece together the fragments of his boyfriend's history, once its already too late?
Trigger warning: Please be aware that this story deals with suicidal ideation. If this is a subject you find uncomfortable, then this book is not recommended.

Edge Of Living is one of those rare books that comes along and sweeps you off your feet. This HL Day novel is absolutely fantastic.

To say that Alex is a broken man is an understatement. He is a mere shell of the man he used to be, as he's hiding, terrified of everyone and everything, and has completely locked himself away from others.

When Austin sees the sad and mysterious Alex working at the library, he is instantly attracted and intrigued by this quiet man.

Soon Alex finds himself feeling safe is Austin's presence. It is beautiful the way that Austin helps to calm him and takes away his nightmares.

Their love is powerful, as Austin tells Alex "My soul likes your soul." How swoon-worthy!

The author skillfully uses flashbacks to slowly reveal Alex's tragic past. As well, the tale is emotionally driven, expertly written, giving us not only just a glimpse, but a clear and steady view into Alex and Austin's thoughts. I was brought along for the ride, able to fully feel every single feeling along with them.

Overall, The Edge Of Living is a captivating romance between two men who are traveling life on two completely different paths. One man is looking for his future, the other is stuck permanently in his past. Their relationship at times seems so damn one sided, but it really isn't. These two men need each other.

I cannot rave enough about Edge Of Living. HL Day has done a phenomenal job with this gut-wrenching story. It is a must read!