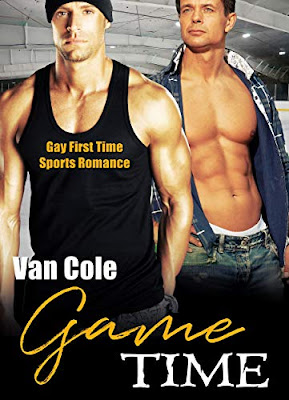 Things Can Get Hot Off The Ice
All Scott has wanted since a child was to represent his favorite hockey team, but after a couple of seasons toiling away as a second string he's traded away unceremoniously. At first it hurts, but he vows to play well enough to make them regret ever letting him go.
He's welcomed at his new team by Mark, the personal trainer, and the two of them form an instant bond. Scott is unable to deny the attraction he feels, even though exploring it could jeopardize his standing among his new team-mates. Mark is an anchor to Scott, until everything around him starts to sink.
Scott is forced to ask himself if his career is more important than his personal life. He's already lost one dream, can he afford to lose another? And when it comes time to face his former club, will he prove them right or wrong?

If you like sports romances, Van Cole's Game Time is a fun one to check out.

Scott's traded to a new team, leaving his boyfriend behind, and discovers not everyone on his new team is happy to have him there. It's not the best of times, but Scott's new massage therapist, Mark, is a welcome light in his life.

Their story is quick, with a fast pace. It contains hesitancy, doubts, fear out being outed and some good chemistry.

Mark's a great guy, who really wants what's best for Scott. And Scott's just a scared, closeted hockey player who doesn't know what to do.

Game Time is good for a short story. It could definitely be great with some more development.