Country music superstar, Trent Thorne is
on the run. What he’s kept hidden from the world is no longer a secret. He
trusted the wrong person, a man he’d stupidly thought he was in love with, and
instead of a happily ever after all he’d gotten was outed. Unwilling to sit
around and watch his private life get plastered all over the news, Trent hits
the road and somehow ends up in his best friend Lemon’s small hometown of Fate,
Texas.

Lance Nichols knows a thing or two about
hiding. He’s so deep in the closet he can’t even see daylight. The former womanizer
finally admitted the truth to himself a few years ago but he never thought he’d
be able to say the words aloud, not to his family, not to his friends, and
certainly not to his secret celebrity crush when the guy stumbles awkwardly
into his life.

Fate brought these two together, but
will it also tear them apart? One newly outed man refuses to go back in the
closet. The other can’t imagine coming out of his.


Stay A Little Longer hooked me immediately. I absolutely love this romance by Jess Bryant.

Trent's a country star and when he's outed he escapes to the small town of Fate. Trent and Lance are brought together by a mistake, sparks flying immediately.

It's fantastic the way these men just understand each other, as they've both spent their lives in the closet. And when they're together, they are hot and steamy.

Overall, Stay A Little Longer is a fantastic story of finding love and realizing when the time to come out is right in front of your eyes. I enjoyed every single second of this book.

Trent Thorne had been betrayed by a man
he’d thought he could trust. The man he’d considered his best friend. The man
who he’d convinced himself he was in love with. The man who he’d been
delusional enough to believe might be in love with him too.

He white-knuckled the steering wheel and
cursed his ex-best friend for the millionth time. He was an idiot. An idiot to
have ever thought Heath reciprocated his feelings. An idiot to have ever said
those three little words, to have ever said a thing about how he felt or who he
was. A major idiot for ever having believed he could have it all.

He’d told Heath his biggest secret. The
one thing he kept from everyone but a trusted few in his inner circle. Nobody
on the outside knew. Not his record label or his band. Certainly, not the
millions of people that bought his albums or the legions of women who threw
themselves at him. He’d told Heath he was gay, and it had turned out to be the
biggest mistake of his life.

And the thing was, Trent hadn’t been
able to deny it. Of course, Heath didn’t know him. Very few people could say
they did. Not the real Trent. Not Trenton James Thorne, Texas native, long-lost
brother and exiled son with an unhealthy fear of firearms and dying alone.
Because to be Trent Thorne, country music superstar, charmer and all-around
lady’s man, he couldn’t be himself.

He couldn’t be gay.

That had been made clear to him from the
day he set foot in Nashville, and in the years since, covering up and hiding
his truth had been as much a full-time job as performing or recording. The
first time that spotlight had hit him and the crowd went wild, he would’ve sold
his soul to the devil to make that feeling last.

In a lot of ways, he knew now that he
had.

He’d sold himself out for the money and
the fame and the success of being worshipped by a bunch of strangers. Because
he’d just wanted to play his music and he’d thought it was the only way. Because
his manager, his record label, and his throng of adoring fans wanted the Trent
Thorne who wiggled his hips and winked at all the girls, who sang bro-country
anthems about hooking up with hot chicks down by the lake and crooned about
soft bodies in moonlight.

Nobody wanted the real Trent Thorne.
They never had. They never would.

The cell phone vibrating in the center
console of his rental called him a liar now too. It hadn’t stopped ringing all
day. Not since the news broke. It seemed the entire fucking world wanted a
piece of the real Trent Thorne now, and it was all because he’d trusted the
wrong person, fallen for the wrong person, shown his true self to someone who
hadn’t liked what they’d seen.

Heath had fuckin’ outed him.

Considering it was his life being
broadcast over every entertainment outlet in the western hemisphere, Trent was
a little fuzzy on the details of how it had happened. He’d woken up to his
ringing phone this morning. His manager, Rick, had said something about Heath
telling a friend who told a friend who told someone who wasn’t a friend… or
something like that.

It sounded so cliché. High school drama
multiplied to the umpteenth level. Trent almost could have laughed. Almost. All
of his carefully laid plans, skillfully guarded secrets, and he’d been outed by
a game of telephone gone awry.

The entire fuckin’ world knew he was gay
now, which meant life as he knew it was over.

Just that fast and just that easily, he
was done in Nashville. He knew it. Had always known it would be the end of his
career if he trusted the wrong person with his true identity and it got out.

But he’d thought he was in love with
Heath, which was just so goddamn ridiculous in the bright light of today that
he had no explanation for how he could have so monumentally screwed up. 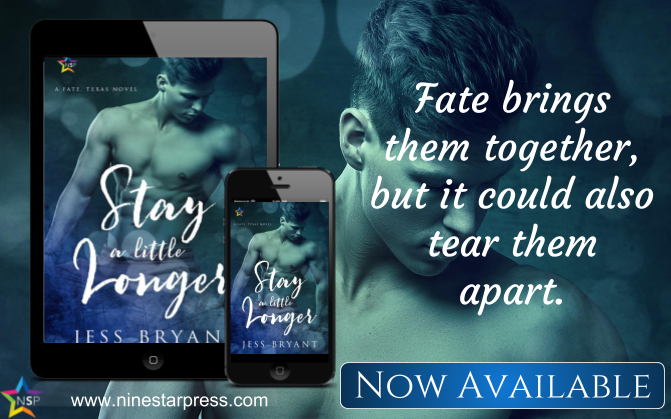 
Jess Bryant is an avid indoorswoman. A city girl trapped in a country girl’s life, her heart resides in Dallas but her soul and roots are in small town Oklahoma. She enjoys manicures, the color pink, and her completely impractical for country life stilettos. She believes that hair color is a legitimate form of therapy, as is reading and writing romance. She started writing as a little girl but her life changed forever when she stole a book from her aunt’s Harlequin collection and she’s been creating
love stories with happily ever afters ever since.

Jess holds a degree in Public Relations
from the University of Oklahoma and is a lifetime supporter of her school and
athletic teams. And why not? They have a ton of National Championships! She may
be a girlie girl but she knows her sports stats and isn’t afraid to tell you
that your school isn’t as cool as hers… or that your sports romance got it all
wrong.

For more information on Jess and
upcoming releases, contact her at JessBryantBooks@gmail.com or follow her on
her many social media accounts for news and shenanigans.