A Companion to the Robbie & Sam Series 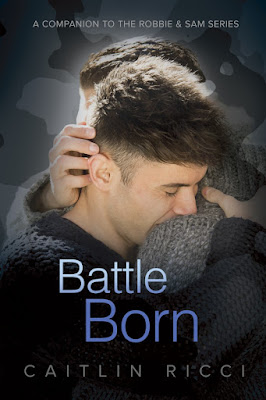 
Three years after running from Thornwood, Colorado, to join the Army, Daniel Messana is no closer to figuring out who he is or what he wants out of life. Now that he’s home, his constant companions are loneliness, PTSD, and guilt over the way he mistreated one of his brothers and abandoned the other.
Franklin Cooper, or Coop, enlisted at eighteen and loved every minute he spent in the Army—until an IED in Afghanistan took his sight. Now he’s home and, with his service dog by his side, ready to regain his independence. The trouble is no one will let him do anything for himself. He’s drowning beneath his family’s oppressive love, and his only respite is the time he’s allowed to spend at the on-base pizza place once a week. That’s where he meets Daniel, and those afternoons become even more special. But both men have a lot to work through before they can take the next step together.
Cover Artist: Aaron Anderson
Review
My Rating - 5 Stars!

Caitlin Ricci's Battle Born is a marvelous romance. This new to me author has definitely impressed me.

Daniel and Coop are two broken and lost former members of the Army. From the very beginning, the tone of this novel struck me as important and I was hooked.

I immediately fell for both Daniel and Coop, and that feeling just got stronger as the story goes continues. Both men help each other in ways they never expected.

Daniel had so much guilt over his past. (I have not read the Robbie & Sam books but I will be doing so now. It will be tough to read that part of Daniel's story though.) Him being redeemed in this book in beautiful, as he is truly an amazing man.

And Coop. Sweet, dear Coop. Yes, he's still getting used to his new reality of being blind, but it's the feeling of hopelessness and complete isolation, due to his parents, that's really the problem.

I absolutely love and adore the way that Daniel treats Coop from the very beginning. Treating him like a person, instead of a blind person. He helps Coop to understand that he can still enjoy many things and do things for himself. His ability to get Coop moving on with his life is just so damn emotional and powerful.

Once they start dating, things happen quickly. It's a novella after all. Just look past any issues you have with that part, and appreciate their relationship and all they mean to one another.

Battle Born is truly an amazing story, full of so much hope and love. I'm so impressed I will definitely be reading more of Caitlin Ricci's books.