Trust The Connection by Brigham Vaughn 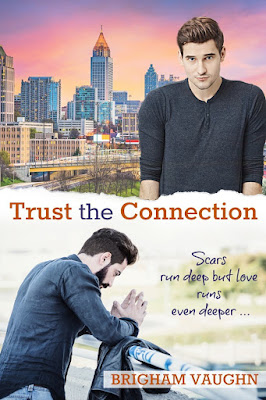 NOTE: This story was previous published as a two-volume serial under the titles of “Connection” and “Trust”. Minor updates have been made but the story is essentially unchanged. This is re-release.

After a lifetime of being told he’s worthless, Evan Harris is forced out of the closet and the only
home he’s ever known. Jobless and homeless, he makes a desperate call to a couple he barely
knows. They give him a place to stay at their place in Atlanta while he gets back on his feet. But
he’s too shy to explore the big city and go after what he wants: a relationship.
Physically and emotionally scarred from a devastating car accident, Jeremy Lewis struggles to
reconcile the brash, outgoing man he used to be with the social recluse he’s become. He’s
resigned himself to being alone, but an encounter with an ex-boyfriend shakes up his dull
existence and brings Evan into his life.
Loneliness draws Evan and Jeremy to each other, but a strong mutual attraction isn’t enough. At
thirty-six, Jeremy is convinced a relationship would be holding twenty-one-year-old Evan back.
Evan must be strong enough to fight for what he wants and Jeremy must let someone close
enough to see his scars. Otherwise, they’ll miss out on the love of a lifetime.

Trust the Connection, by Brigham Vaughn is an amazing story.


Evan's been kicked out of his home, and at 20 years old he's without a job, without a home, and completely on his own. Until he's taken in by Russ and Stephen.


Jeremy's 36 and lives in chronic pain from an accident in his past. He's alive and functioning, but is unable to live a full life. He's depressed, feeling that he's half a man now and there's no reason to live. He's crippled, scarred, damaged and lonely. Very lonely.

Then Jeremy and Evan meet at a party, bringing these two lonely men together. When Jeremy first sees Evan, his long dormant sex drive comes back to life. What follows is an amazing story of these two men coming together despite their emotional obstacles.

The story is well written, the characters well developed and the theme powerful. We get to know these characters well, are able to feel their feelings along with them, and are thrilled when their slow burn romance comes to fruition.

Their story contains a whole lot of ups and downs, struggles over their age difference, and a whole lot of heartbreak. They are certainly an odd couple, but they're perfect for one another.

One wonderful lesson of this story is that life is fragile and we need to hold onto what matters to us.

The other powerful theme is that family does not need to be biological. Just because someone's rejected by their real family, doesn't mean we can't make our own families.

The author's writing is wonderful, creating fantastic characters and taking them on a journey of growth. I definitely recommend this story. 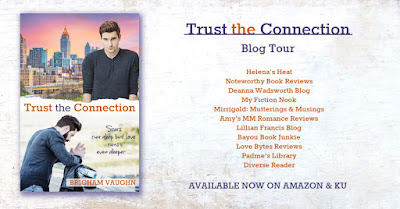 Brigham Vaughn is on the adventure of a lifetime as a full-time author. She devours books at an
alarming rate and hasn’t let her short arms and long torso stop her from doing yoga. She makes a
killer key lime pie, hates green peppers, and loves wine tasting tours. A collector of vintage Nancy
Drew books and green glassware, she enjoys poking around in antique shops and refinishing thrift
store furniture. An avid photographer, she dreams of traveling the world and she can’t wait to
discover everything else life has to offer her.
Her books range from short stories to novellas. They explore gay, bisexual, lesbian, and
polyamorous romance in contemporary settings.

Email ThisBlogThis!Share to TwitterShare to FacebookShare to Pinterest
Labels: 5 Stars, age diff, B Vaughn, disabled, homeless, may to dec, May to Sep