Jeremy Warsh has been in off-mode ever since his grandpa’s death a couple years ago. He set aside their shared passion, comic art, and hasn’t looked back. As an introvert from the other side of town, he fully expects to spend his boring life bagging groceries until, maybe one day, he’s promoted to store manager.

Yet, his two best friends, Kasey and Stuart, are different. They’re not afraid to demand more out of everyone. When Kasey comes out, Jeremy’s inspired. He picks up his colored pencils and starts
drawing comics again, creating a no-nonsense, truth-talking character named Penny Kind. Who speaks to him. Literally.

The friend-group sets in motion Stuart’s plans for a huge Homecoming prank, and if they can get Penny’s comic trending, they might be able to pull it off. Could this be a stepping-stone to a future
Jeremy’s only dreamed of? And after he kisses a boy at a college party, will Jeremy finally face what he’s been hiding from?


The Evolution of Jeremy Warsh is an excellent coming of age story by Jess Moore.

Jeremy is bullied, poor, and his life is weighed down with problems. On top of this, he's also discovering his sexuality. The one fantastic thing he has going for him is his relationship with his mother. Totally tear-jerking.

This tale captures many of the usual high school issues. It encompasses friendships, family, coming out, and discovering yourself. It's well written, and developed well.

From the beginning, I became engrossed in Jeremy's story. I definitely recommend it to anyone who enjoys young adult stories.

The Evolution of Jeremy Warsh

Chapter One
Chilly in the underground basement, one of my best friends and I spent the final hours of summer’s freedom on opposite sides of the couch. Kasey’s head poked out from under an orange-and-black
chevron afghan. Her arm snaked out from under the blanket as she reached for the bowl of potato chips between us. In fact, we had moved only for snack and/or bathroom breaks since setting up camp earlier in the day. The last of August’s to-do list was to listen to Nirvana’s entire library.

“Did you catch this live when it came out on MTV?” I asked, as the first few notes of “Lake of Fire” sounded. Cobain’s scratchy prophet-like lilt emanated from a set of waist-high speakers
next to the fireplace.

“In middle school? I don’t know. They re-air it every now and then though.” She licked the BBQ-flavored spices from a potato chip.

“It wasn’t long after that he was gone, and we were all down here drinking our first beers in his honor.” I gave my can of Mountain Dew a little shake, empty.

“I remember.” Kasey leaned her head back against the pillow. “This is too depressing for words.” She popped the rest of the chip in her mouth and jumped up from the couch to switch off the stereo.

“Come on, Jeremy. You need to practice.”
She grabbed my hand and tried to pull me from the couch.

“Yes! School starts tomorrow.” She gave up and walked toward her bedroom. Kasey’s basement was hardly that. Basically .it was its own two-bedroom apartment with a TV room, kitchen, and dining space. The lower level of her house cut into the hill and opened to a brick patio overlooking a pool and woods beyond. She’d lived down there with her older brother until he left for college. Now, it was just Kasey; her parents lived upstairs.

“Fine!” I called after her. Our senior year was less than twenty-four hours away; she was probably right. My distorted reflection peered back at me from the TV’s black glass as I forced myself out
of the sunken cushions.

Kasey’s bedroom walls were sponge-painted with textured splats in varying shades of flamingo pink. It was dizzying and the opposite of subtle, but the same went for her.

“Jeez, you’ve grown, like, a foot in the last month. You could’ve played football this year.” She reached for my shoulders and positioned me in front of her closet mirrors.

“That would mean more time around Russ. Plus, Mom would never let me.”

Kasey stepped back, assessing my reflection. “Now, say it.”

“Suck it, Russ.” The words rolled clumsily off my tongue. I rushed through the line because I hated every minute of it.

Russ Landry had been making my life miserable forever. Kasey was convinced if I stood up to him, he’d leave me alone. I figured it would likely get me punched. But ignoring the bastard, which I’d been trying to do for years, proved an unsuccessful strategy.

She shoved me forward and flopped onto her bed. “You’ll get nowhere if you say it like that. This needs flair, Jeremy. Again.”

I repeated the line with some sass that I would never replicate in real life.

“Grasshopper, you must deliver a blow of such magnitude that thine enemy is left stunned.” Kasey flipped through the latest issue of a teen fashion magazine. She hadn’t even seen my sashay.

“Is that why you tell people to suck your dick?” I cleared my throat, a little embarrassed.

“I only tell misogynists that, and yyyyep.” Kasey unwrapped a sucker and stuck it in her mouth. “Wah-wa?” she asked, her speech hindered by the candy.

“I’m good.” I sat next to her. The magazine contained musky perfume samples. Kasey found one and rubbed the paper on both her wrists and neck.

“Yuck, that smells awful,” I said.

“You’re crazy. Everyone loves CK One.” She flipped through the special back-to-school edition. “Wanna read your horoscope? Cancer, right?”

She read my crab-shelled future. 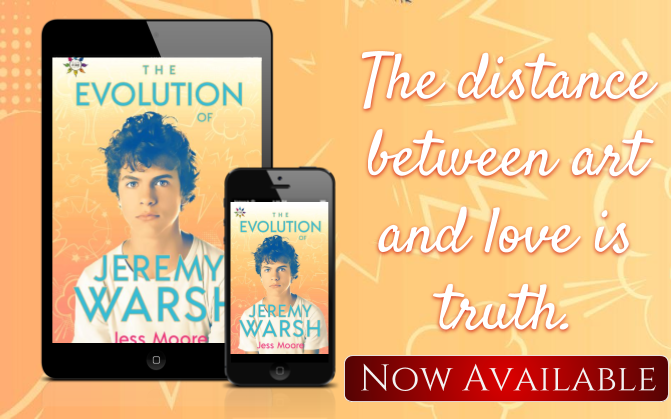 
Jess Moore geeks out over books and homemade pizza. Her past lives include careers in both teaching and social work. Currently, she resides in historic gold-mining California and writes YA novels in the very early morning while her family sometimes sleeps.