After The End by Sara York 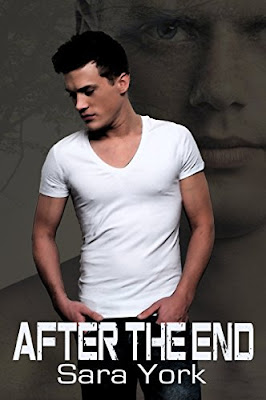 With international flights crisscrossing the skies on an hourly basis, are we ever really safe?
When a strain of the Ebola virus mutates; it spreads quickly leaving the medical community shattered. People are dropping in the streets and life, as most know it, comes to an end. Two city dweller survivors, Dean and William, are forced to flee the city and live in the wilderness—where dangers lurk behind every tree and in every valley. Not everyone alive after the end is good, and William and Dean are faced with challenges that would bring many to their knees.
Growing up in the hood of Atlanta, Dean knows how to overcome trials, but he knows nothing of love. Can he sustain a relationship with William, or will his doubts end them before they even have a chance?
From birth William has had a silver spoon in his mouth and two in each hand, but the end brings him face to face with reality where he has to take responsibility for his life. After the end, money has no meaning, and life is lived on the edge.
Join William and Dean after the end and find out how close to the edge they come.


Sara York's After The End is a gripping and thrilling novel.

We meet Dean and William at a party. Dean's an outcast, trying to hide his real self from people so no one finds out how poor he is. Meanwhile, William's the rich kid who can't have what he really wants, Dean. Dean and William have been hooking up for a while now, but with Dean leaving for college soon, William begs him not to leave.

This book is so darn well written. I could feel every single emotion, and I could visualize every single scene. Every moment was written so perfectly, so descriptively. I could feel the danger of their situations as if I was there with them.

Ultimately, it's the life lessons the boys, and the new surviving society learn that are inspiring and remarkable. These new perspectives, after surviving hell on earth, can really change the world.

I am thrilled to have finally discovered After The End. I am an avid fan of Sara York, but this one flew under the radar for me. It truly is a special story.