Must Have Been Love by Tragen Moss 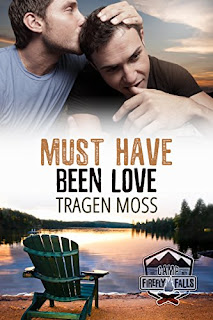 Pretending to still be a happy couple isn’t easy. But it’s even harder to pretend you’re not in love anymore when you are.When workaholic, suit-and-tie wearing Miller Johnson, and big, burly mechanic Brandon Fuller break up four days before a family wedding, they agree to attend the gathering as a couple to not cast a shadow on the bride and groom’s big day. The wedding, a three-day event, is being held at Camp Firefly Falls, and they’ll have to bunk together in a cabin and attend all the parties as if they are still a happy couple—something neither of them is looking forward to. Especially when neither one of them knows exactly why they broke up in the first place. It must have been love, but it’s over now.

Or is it?
Author’s Note: The one place these two never had problems was in the bedroom—don’t expect that to change just because they are “broken up.” Seriously, these two are hot and heavy and you might want to wear welder’s gloves when you’re holding your eReader.

It's not easy to spend a weekend with your ex when you don't actually want to break up. Brandon and Miller have broken up, but they haven't told anyone and are now attending a family wedding together.

They have never had a problem with their sex lives.  It is communication that is their problem. They both love each other, but neither one has ever spoken those three words to the other.

As they are together at this wedding for the weekend, both are sad that their relationship has ended and spend time reflecting about the past year. Miller also laments that he'll be losing Brandon's family too, as he isn't communicating with his own family anymore. Both men are confused as to where their relationship went wrong and why they broke up.

Must Have Been Love is a sweet, short, second chance romance. It is definitely worth checking out. I am glad to have found it.