True to You by Tony Correia 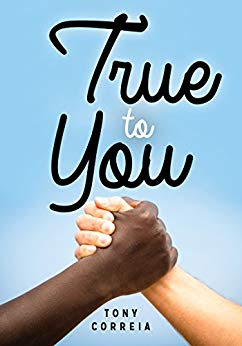 
Jorge Gomez is a gay teen from a working-class family who drops out of school after fighting with bullies on behalf of another kid. He starts training to become a pro wrestler, and finds that he has the talent that could make it a promising career. At the first wrestling show Jorge attends, he meets Thom, who is from a politically active upper middle-class family. It's a case of opposites attracting, but Jorge feels threatened when he learns that Thom's ex-boyfriend is determined to win Thom back.
Jorge tries to reconcile his sexual orientation with the image and loyalty demanded of a career as a wrestler. Looking to jumpstart his career, he switches to a wrestling club that promises to make him a star. When he adopts a flamboyantly gay "bad guy" wrestling persona, Thom calls him out for promoting homophobia. Jorge reacts badly with the result that he is kicked out of the club and is dumped by Thom. The crisis leads Jorge to find a way to be true to himself and who he is, and to reconcile with Thom.


In True To You, when Jorge is kicked out of school for fighting, he starts training for pro-wrestling, most likely as a way of coping with his sexuality.

Once he starts dating Thom, he is warned that he needs to hide the fact that he's gay from the fans. He's also warned that Thom's ex wants to win him back.

This is a well told story of an up and coming wrestler as he faces many tough decisions along the way. There were times I really wanted to smack Jorge and tell him to smarten up, knowing the crash course he is setting himself on.

The writing style is fast paced, with a lot happening quickly. There isn't much "meat" to the reasons of the events taking place, but it is still a good story.

Overall, True To You is a story about choices. It isn't always easy to make the right choice, and sometimes you need to admit defeat and decide how to move forward. Tony Correia does a good job of telling such a tale.