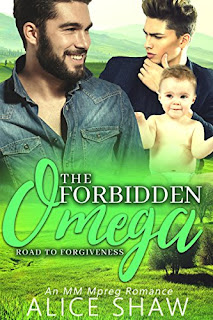 He was my best friend in the world. Now he is forbidden…Cole Harton grew up in the strictest town in the country. When Cole falls in love with his omega best friend Piper, the alpha is shunned by the community and forced to leave everything behind. Of course, that meant breaking up with his best friend and love of his life, Piper Grace.
Years later, Cole receives an unexpected call. Without warning, his abusive father passed away. Tragedy seems to follow him everywhere he goes, but Cole is destined for a change. Despite it all, he is excited, worried, and nervous about one thing: seeing Piper again.
Piper is a cute and fun spirited omega with a heart of gold. He has endured a lifetime of hurt, but he has always tried to stay positive. Forced into a relationship with an abusive beta at a young age, he remains silent. That is, until Cole returns…
He never forgot about Cole, the alpha that made his heart swell with adoration. Suddenly, his life turns upside down. The alpha he has loved his whole life is back, and he doesn’t know what to do.
They came from nothing, but now they’re so close to getting it all back. Can they withstand the hatred of their community and rebuild their love?
The Forbidden Omega is a full-length friends-to-lovers, second chance romance novel. It is 45k words. This book contains hot and sexy scenes, emotional moments full of desire, and a beautiful baby to fill your hearts with love. This book is meant for 18+ readers.

In Forbidden Omega, Cole lives in a society where Betas rule and you can't be openly in love when you're an Alpha or Omega.


Growing up, Piper loved best friend, Cole. Then suddenly, Cole up and left town with no word.
When Cole returns home, Piper is no longer the boy he once loved. He quickly sees that Piper is in an abusive relationship with Jacob.

During their time together, Piper can see the difference between Cole and Jacob. Jacob wants to control him. But, in Cole's eyes he sees concern, not anger. Basically, Piper is trapped.

Cole grew up with an abusive father. He now finds out why his dad was so mean and controlling. When Piper's omega dad died, his father changed. He became angry, bitter and mean. Cole is shocked to find out they his dads used to be sweetly, sappily in love.

In their strict society, marriages are arranged, but many couples aren't having children. As Piper explains, it's because they aren't in love.

Piper realizes as time goes on that Cole is his one true protector and his one true friend. With Cole, he feels free. Piper has a decision to make. Once he sees the truth, can he go back to the way he was living?

I enjoyed reading Forbidden Omega. It is definitely a fun, second chance romance.
at June 14, 2018