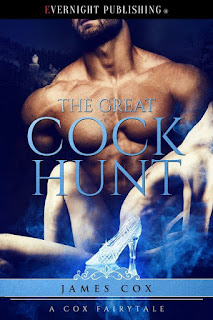 BLURB
Cinderelle is a cross-dresser.
Prince Charming has a shoe fetish.
And the fairy godmother can twist your wish into a nightmare.
Cin wants nothing more than to forget his life as his family’s slave for a few hours. A party at the palace seems like the thing to do. Putting on his step-sister’s clothes, he looks better than any princess there. He stumbles upon the prince’s orgy and, after all these miserable years, Cin finally finds something to live for, to fight for. Prince Henry Charming. Too bad his evil fairy godmother shows up with dwarf reinforcements.
It’s time to take off his stuffed bra and put on a sword, because everyone is hunting poor
REVIEW - 4 Stars
James Cox brings us another standalone in his A Cox Fairytale series. The Great Cock Hunt is a fun twist on the traditional Cinderella story. It is definitely not the version of the classic that you grew up reading.
Cin is trapped, living with his horrible stepmother and stepsisters. He spends each day as their slave, as well as fighting off sexual advances from one of his stepsisters.
As is typical Cinderella fashion, the Prince is having a huge party. Cin’s step-family try and thwart any effort of him attending but he prevails and when he arrives at the Palace, sans invitation, the staff assumes that he is there for the Prince’s private gathering, instead of the main party. There he finds an orgy taking place. Definitely not what he was expecting! Prince Henry Charming welcomes him to the party and Cin is instantly aroused.
What no one knows is that Cin is a man, dressed as a woman. And he’s the first “woman” to ever turn the Prince on sexually. Thus, Henry isn’t surprised when he discovers that Cin is actually a man. Prince Henry is a kind soul, he knows that people are never as they seem and he believes that Cin taking care of his family is noble. Best yet, Prince Henry has a shoe fetish and he’s been searching for the perfect cock his whole life.
When Cin’s fairy Godmother arrives, Cin runs away. But this fairy Godmother isn’t like the one you usually find in Cinderella stories. She is after Cin, for he is indebted to her for a past deal that they made. Soon he finds himself on the run, with wanted posters saying ‘Join the great cock hunt.’
I find Cin to be a fun character. He has a wonderful sense of humour despite all that he has to endure. Prince Henry is similar to the classic, determined Prince, but he is attracted to guys. I certainly love this side of him. I know I will never hear the phrase “shoe fetish” again without thinking about Cin’s idea of what a shoe fetish entails, or what a shoe fetish actually can involve.
The Great Cock Hunt is a fun, quick read with a wonderful, sexy twist on the normal Cinderella stories. I love James Cox’s writing style and the narrative of the story, finding it both intriguing and humorous. I thrilled at the pace and the twists involved. This is definitely a recommended read!
at June 21, 2018