The Solution by Piper Scott 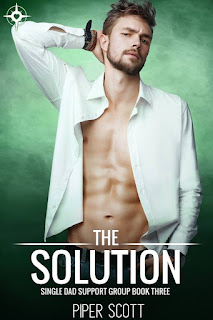 Rumors about Vincent’s past threaten to overthrow his future. The solution? He’s about to find it in the storage closet at his friend’s wedding.
Independent, introverted, and eager to please, all single dad Vincent is expecting when he flies in to attend his friend’s wedding is a good time… not an irresistible older omega who slips into his heart as quickly as he slips into his bed. With a job relocation to the city on the horizon, a relationship isn’t off the table, but there’s a catch.
There’s something about Vincent’s past his prospective lover needs to know—something he’d rather leave behind.
Can he jeopardize his fresh start for a chance at love?
Alone his entire life, all Mal wants is to have a family. The solution? Take matters into his own hands…
Always a babysitter, never a dad, Mal has struggled with issues of self-worth his entire life, and at his age, he’s come to accept that he’s meant to be alone. Eager to have a family he can love, and who will love him back, he decides to pursue IVF and start a family on his own. But when his path intersects Vincent’s, he finds himself questioning whether love really is possible.
Mal is no stranger to the evil in men’s hearts. The only one he can trust is himself, isn’t it? But with kind and thoughtful Vincent, imagining a brighter future is a temptation that might prove too good to resist.
When life reunites their paths in unexpected ways after a sizzling one-night stand, Vincent and Mal are faced with a choice—let their forbidden connection keep them apart, or indulge in love and lust like they’ve never known it before.
The Solution is a 90,000 word contemporary omegaverse mpreg novel featuring a quirky group of single dads, fabulous revenge, an ice-cold shower that will leave you hot beneath the collar, and a unique take on Daddy kink perfect for two men who don’t quite fit the mold.

The Solution is the 3rd book in the Single Dad's Support Group series by Piper Scott. Having enjoyed the first 2 books, I had to dive into this one as soon as I could.

Mal is an older omega, at the age of 50, who is going through IVF to try to have a baby. Now he's stuck with frequent bouts of heat that are out of control. When one such heat arrives, he tries to deal with it and Vincent arrives, by mistake, just in time to help Mal find release. Thus, Vincent believes he's found exactly what he is meant for, to give Mal pleasure and he's elated that Mal was willing to accept his pleasure.

Mal has already accepted that he won't find a long term romance. He suffered abuse for years and has been very broken, and is just now able to begin to move on, wanting to become a father.

As the two men get further involved, they are forced to keep secrets, and if they have any chance to be together, they both need to open up to each other and be vulnerable. Add in a fun age difference that leads to some wonderful Daddy kink, and this romance really starts to take off.

It is so exciting to see the gang meet up for the wedding of Gwynn! This is the first time they are meeting in person, which is just so damn fun!

The Solution, by Piper Scott, is a great addition to the Single Dad's Support Group series.

Email ThisBlogThis!Share to TwitterShare to FacebookShare to Pinterest
Labels: 5 Stars, May to Sep, Omegaverse, P Scott