Challenge, Kinky in the City #2 by Quinn Ward 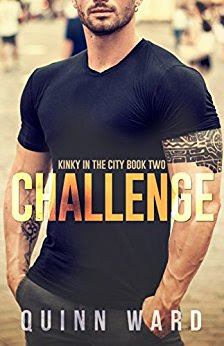 When two men reveal the secrets they tried keeping, even from each other, sparks will fly...

Freddie's life changed forever when he walked in on his best friend dancing around the room in women's lingerie. A lifetime of friendship was buried in the same box as Peter's lingerie and makeup. The single father isn't ready to face the man who made him question his sexuality when they were teens.He may not have a choice.Peter refuses to call himself the black sheep of the family, because his life has been nothing but color since he left home rather than face a future he didn't want. The death of his mother brings him home, and he can't leave until he knows his sister's okay. When Freddie offers him a place to stay, he's not certain his heart will survive.Can Freddie make Peter believe he's not turned off by a bit of satin and lace while finally exploring his bisexuality?

Freddie has never allowed himself to explore his bisexual side. Instead, he got married and had a daughter.

When he meets up again with his ex best friend, Freddie is in the middle of a divorce and raising his daughter alone. Peter meanwhile, is displaying his femme side. He loves makeup, dyed hair, and heels. He knows that his dad disapproves, but he's hoping to find some approval while he's home for his mom's funeral.

Together, Peter and Freddie decide to help Freddie explore his repressed gay feelings and it is super hot! Freddie is super excited by Peter's lingerie and it makes for some great scenes. I love that throughout the book, Freddie makes a point of letting Peter know that although he is turned on by the lingerie, he is also turned on by Peter, no matter how he is dressed.

Peter and his father do not get along. At all. Peter is a complete disappointment to his dad and left town. One of the reasons that wearing lingerie makes him feel good, is that it's like a F*&* you to his dad, even if his dad doesn't know about it. He also likes wearing lingerie as a way of showing himself that he can be his true self.

A fantastic theme in this book is sometimes people need a reason to stay. Peter couldn't stay because his father was ruthless with him. But things change, dreams change, and maybe Peter will find a reason to stay now.

Did I mention that the sex scenes are super hot?

There are some wonderful secondary characters.  Freddie's daughter, Sophia, is adorable. She's enamoured by Peter, who helps her put on makeup and takes her out to dinner. And Freddie's mom is just perfect!

There are few great meaningful themes in the story.  First, the difference between sexual demands fueled by desire versus coming from a need to control. Being able to distinguish between these is key to a successful relationship. Another is finding that one person you can fully trust and reveal your true self to. When your partner realizes how precious that is, that is a gift to cherish.

I find their trip back to the city, to Peter's world to be eye-opening. Their worlds are vastly different. Peter has been living in the city, in a small apartment, with roommates, and working as a makeup artist. Freddie lives in their small hometown, in a townhouse, with his kid, and works in a family restaurant. Can their lives possibly mesh? Can they actually build a life together? Freddie knows he can't fit into city life. He is overwhelmed and feels completely out of place. But Freddie certainly doesn't want Peter to have to choose between the two.

I really like Challenge, Kinky in the City #2. It is a really great story that is well written, well developed and has a great plot. I am excited to have found this series and will be going back to read Book 1 right away! Quinn Ward did an excellent job with this story and I highly recommend it.