Easy Does it Twice by Gianna Holmes 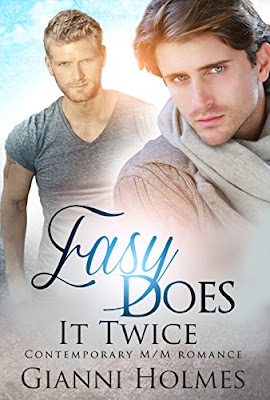 When Gordon’s wife dies, he has no intentions of getting involved with anyone. Then, in walks, Beau, the French teacher his daughter has a crush on, and all Gordon's good intentions fly out the window. For Beau, his number one rule is never to be romantically involved with students or their guardians. But, every rule has an exception— his is Gordon Mattis.Gordon plans to come out to his family and friends slowly, but before he has the chance, a video of the two men locking lips goes viral. Is the town of Lacovia ready for Beau and Gordon's relationship? More importantly, would his homophobic teenage son and his daughter accept having two fathers? Or will Gordon be forced to give up the happiness he has found with Beau?Easy Does It Twice is a 98k word contemporary gay romance novel, the first in the series "Till There Was You." It engages topics such as the discrimination of teachers in the LGBTQ community and coming out later in life. Warning: This book discusses abuse and mild violence, much of which is off the page. Themes include: Out For You, small town, and May-December romance.

Easy Does It Twice is a great romantic story that's packed with a lot of themes.

Gordon has never been with a man. He might have wanted to, but he never acted on it. Now that his wife has died, and he meets Beau, he doesn't know if he can still hold back those feelings.

Unfortunately, Beau happens to be his daughter's French teacher, which will definitely complicate things. His kids are still reeling from the death of their mom, and how can he get involved with his kid's teacher?

Beau, meanwhile, has his own issues to deal with as a result of his manipulative and abusive ex.

Things will not be easy for Gordon and Beau.  Gordon, of course, will certainly hear that he shouldn't be dating so soon after his wife's death. He will also have to deal with homophobic friends, who will try to complicate things for both men.

The issues with Gordon's friend is heart-breaking and awful to witness.  Being gay does not change who a person is, but unfortunately, not everyone understands this. It is tragic to see the lengths someone will go to just because they are homophobic.

The scenes with Gordon's son, Ollie are also painful to read. They are so raw, real and tragic. And unfortunately, this happens way too often in life.

Gianna Holmes gracefully tackles a lot in Easy Does it Twice. It is a wonderfully written book, with many issues involved. In the end, it is a wonderful romance that I highly recommend.