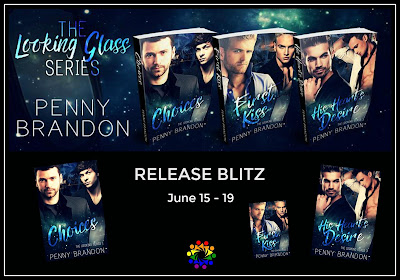 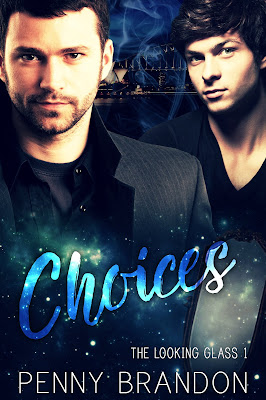 Blurb:
Marc was straight, always had been and always thought he would be, but when shown his true love in a magic mirror he was shocked to find out his true love was a man. Not only that, it was up to him to convince his true love they were meant to be together. All bad enough, but after finding Liam, the only way he's able to persuade Liam to go out with him is to offer him sex – even though that was something Marc was definitely not ready for.
Liam thought Marc was crazy. Marc was straight and he was talking about true love and making a life together, but Liam didn't believe in love and he certainly wasn't going to fall in love with a crazy straight guy regardless of how sexy he was. But he hadn't reckoned on Marc's pushy attitude or his offer of sex which, no matter how much he knew he should, Liam couldn't turn down. 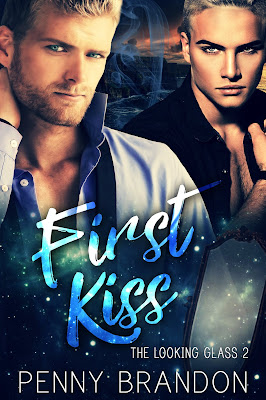 The second Brenn saw Joey’s image in the magic mirror, he was hooked. The moment he saw him in real life, Brenn knew Joey was going to be his forever. Joey was flirty, and fun, and he had the most gorgeous smile, but then Joey told him he was dying. Though devastated, Brenn didn’t want to give up on Joey, so he offered to look after him and make his last few days as comfortable as possible, but was that going to be enough when all Brenn really wanted was for Joey to live?
Brenn was everything Joey could have wished for; strong, built, and with the most amazing eyes. Also, Brenn was in love with him. That would have given Joey something to live for, if it hadn’t been too late. He had about three weeks left, but that didn’t seem to matter to Brenn. Brenn wanted to take him home, and Joey was willing to go with him, but on two conditions. He wanted Brenn to make love to him before he died, but no kissing. 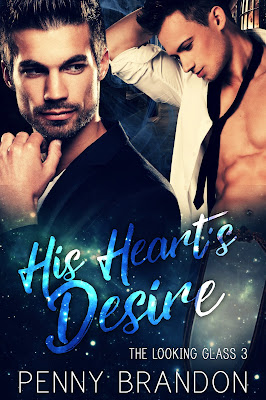 Blurb:
As the keeper of a magic mirror that shows those lucky few their one true love, Simon dreams of the day it will show him his, but he never dreamt of a punk-assed kid with ripped jeans and rainbow colored hair. Devastated, Simon tries to push Alex away, refusing to tell him they were fated, but Alex keeps coming back, showing all the signs of a man drawn to his soulmate. Realizing he’s made a terrible mistake, Simon figures the only way to fix it is to be the man Alex wants because Alex is the man Simon needs if he’s ever to have a future.
Never before has Alex fallen so hard for a man who obviously doesn’t like him, but Alex is sure there’s a passionate man beneath Simon’s prickly exterior. Peeling away Simon’s layers is like ripping off a bandaid, but it’s worth it when Alex finally has Simon in his arms. The problem is, though he may have Simon’s body, he doesn’t have his heart, and that’s the part Alex wants most. Until he finds out Simon has lied to him.

NOTE:
Though The Looking Glass is a series of three books, each one can be read as a standalone, however, there is one character (The Mirror's Keeper - Simon) who is a part of the first two books, and his story is told in the third. So those reading His Heart's Desire (The Looking Glass 3) may want to read the first book Choices (TLG 1), and then the second book First Kiss (TLG 2) if they want to get the whole of Simon's story. But those reading Choices or First Kiss don't need to read either of the others. 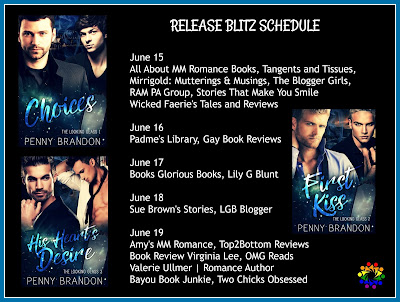