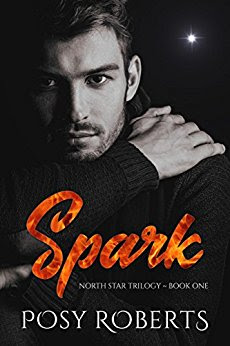 The North Star Trilogy by Posy Roberts is one of my all-time favorite series.

I recently reviewed the revised and released Book 1, Spark.

BLURB
A love story with a seventeen-year intermission.
Hugo Thorson fell in love when he was sixteen. He’s maybe been in love since, but probably not. He’s been too busy directing plays to devote much time to men who can’t accept all of him. No one ever made him feel like his first love did.
Kevin Magnus married a woman and has two children, but the marriage wasn’t happy. In the shadow of divorce, he’s striving to be a better father, but he’s still a work in progress.
When Hugo and Kevin bump into each other at the lake, memories of their last kiss incite a new first kiss. Visions of the life they always wanted are vivid, but so much stands in the way of their dreams. Hugo is out and proud but no one knows Kevin’s bisexual. If Kevin comes out, he risks losing custody of his kids. If he doesn’t walk hand in hand with Hugo, he risks losing the love of his life.
The curtain may never rise on their second act.
First Edition Publication: September 1, 2013 at Dreamspinner Press

REVIEW - 5 Stars!
The North Star Trilogy by Posy Roberts is one of the first male/male series that I read and it remains dear to my heart to this day. I am super excited that the series has been re-edited and re-released.
In Spark, the start of this trilogy, we meet Hugo and Kevin and learn the history of their relationship through expertly crafted flashbacks.
As teenagers, Hugo and Kevin sneak around and fall in love. Unfortunately, their relationship remains closeted because Kevin’s controlling father doesn’t even want Kevin to be friends with Hugo.
During their high school years, Kevin dates girls to try and hide his feelings about Hugo and despite promising to keep in touch when they leave for college, their plans never come to fruition.
The deceptive nature of their relationship is a tough read. I adore the couple as they have their fun and romantic times, but it’s heartbreaking to witness Hugo have to see Kevin with girls.
Fast forward seventeen years, Hugo reunites with Kevin by mistake when Hugo agrees to accompany his best friend, Summer, on a trip.
Throughout the book, they learn about each other’s lives. Kevin is now a father of two, and having drifted apart from his wife, is in the process of a divorce after his father’s death affords him the courage to start proceedings.
Hugo travels often directing plays and is weary of developing a real relationship. He has been cheated on in the past and is reluctant to trust anyone again.
The chemistry is still there as they rekindle the flame. I promise you will feel every single romantic moment with them and will be riveted by every sexual interaction.
I absolutely adore Hugo and Kevin, from the beginning to the end. I love how they connect as teens and struggle with their sexuality. They are both just trying to be with the one they love.
To get a glimpse of their strong feelings for each other, this is a  note that Kevin sends to Hugo in high school, accompanying a little bouquet of candy canes:


Red because you woke me up and make me feel alive.
Orange because your words heal what my father breaks.
Yellow because your smile is like sunshine.
Green because of where I first kissed you. It was because you were so beautiful surrounded by the forest.
Blue because I feel serenity when I’m with you.
Violet because we’re connected. I feel you in me all the time.
Rainbow because you showed me my truth even though it has to remain a secret.
Posy Roberts writing style is riveting and charming and leaves you feeling every single emotion these men experience as if you’re right there with them. Her descriptions of the environment are realistic and generous. The lake ends up being a wonderful secondary character that adds life to the setting, as well as being an integral part of the story.
Spark is an absolute page-turner. Set aside some time to read this because it will suck you in and you won’t be able to put it down. Posy Roberts will take you on a spectacular journey of love and discovery.
To see how this release differs from the original 2013 version, check out this post on Posy Roberts blog. It is extremely informative and hits on the true nature of her edits. I have long suggested this series to others, noticing that it seemed to live in the shadows. I am thrilled for Posy’s re-release and I hope that this series now gets the attention it so deserves!
at June 28, 2018